In the throes of winter, in my mind, I am enjoying a nostalgic trip back to our summer in France last year.  Our French friends Carole and Laurent (2nd and 3rd from left) graciously welcomed David, me, and our friends Tulin (center)and Dave (on right), into their home in Tours.  We had many fine meals with them.  Carole is a wonderful cook.  Her magret of duck cooked in peaches is sublime, as is her fois gras and ratatouille.  But I have been thinking most about her stuffed vegetables. The stuffed tomatoes and peppers turned out to be a collaboration between Carole and Tulin; a little bit French from Carole and a little bit Turkish from Tulin, who is originally from Istanbul.  I wish that I had paid more attention to the ingredients that they used.  I was a bit jet-lagged at the time. All I know is that every bite of the casserole was eaten with relish. When I attempted to duplicate this dish, I used peppers and zucchini because they are readily available this time of year.  I avoid tomatoes in winter.  My inspiration was a recipe from Giada De Laurentiis.  Now we have an Italian spin.  But I guess the point is that many cultures have recipes for stuffed vegetables.  Whatever the cuisine, there is great flavor in stuffed vegetables.  And I was able to taste again, the wonderful food that we shared last summer. I am calling these stuffed vegetables “Provencal” because of the bright colors, the use of olive oil, garlic and herbs, and because visiting sunny Provence was one of the highlights of our trip. Bring a little Provencal sunshine to your table as well. Welcome to my new Word Press website.  I still have some technical issues to work out, but I am happy with the design and look of my updated blog.  Thanks to my talented Son and Daughter-in-Law for their expertise.  If you encounter any problems in leaving comments or with any other issue please email me at pennyklett@gmail.com.

Thanksgiving is an excuse for wonderful leftovers in my opinion.  Every year I make an extra pumpkin pie just so I can have it for breakfast for a week.  But turkey tetrazzini has always been my reason for roasting a turkey.  It is just as much a tradition as the Thanksgiving dinner itself. I have been using the same recipe for years and it will be difficult for me to be specific about proportions because everything is now done by rote.  But one thing I have learned over the years is to use less pasta than you think you will need because the pasta absorbs a lot of the sauce while it bakes. Enjoy this simple dish made from leftovers.  It goes well with that leftover cranberry sauce too.

In large skillet melt butter over medium heat.  Add flour and whisk flour and butter together until it turns a light brown.  Mix together wine and chicken broth.  Add to skillet.  Continue whisking until sauce thickens.  Add 1/2 and 1/2 and turkey.  Cook until heated through.  Mix in cooked spaghetti.  Add a little pasta water if it is dry.

Pour contents of skillet into a greased casserole.  Sprinkle top with almonds, panko crumbs and Parmesan cheese.  Bake casserole until bubbly and cheese and breadcrumbs are browned. (About 20 minutes). 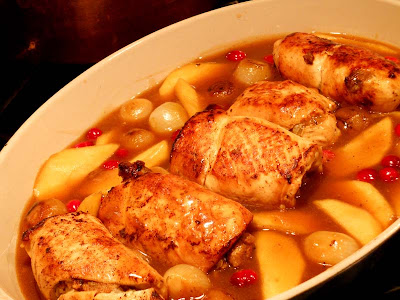 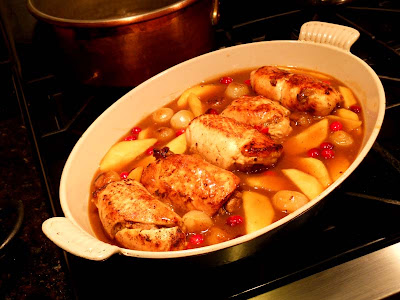 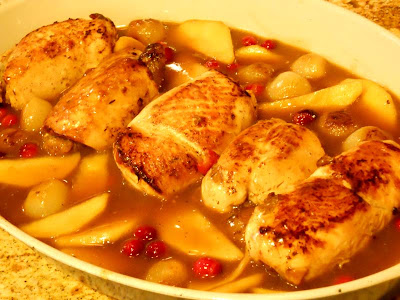 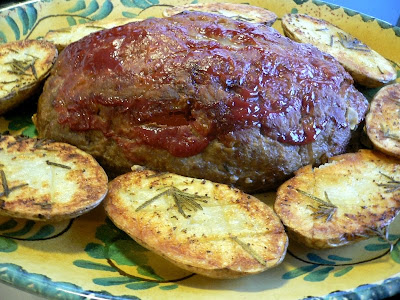 When you read a novel, do you do what I do? No matter what the dire straits the main characters find themselves in, I am always comforted by the interludes when they stop for a meal. Sometimes it is nothing more than a thick sandwich of pastrami on rye eaten over the kitchen sink with grainy mustard dripping seductively out around the edges. Sometimes in the middle of a murder trial, the beleaguered defense attorney finds solace in a hastily prepared meal of a cheese omelet and buttered toast washed down with a good Cabernet. No matter the seriousness of the drama unfolding, I judge many books on how they address food. I can stand only so much suspense and drama. I need the grounding presence of people who eat and enjoy food to keep me interested. Is it just me? It could just be one of my quirks because I am such a foodie.

One of the hardest parts of being on this diet is I feel like one of my favorite toys has been taken away from me. Food in all of it’s guises fascinates me. I would probably be happy just reading cookbooks for the rest of my life. So . . . . I am bored with what I have been eating and I feel like I have nothing to say on my blog. But I do know what I have to say about this turkey meatloaf. It is really good and it has given me comfort in the middle of this weight loss campaign. And to tell you the truth it is lower in calories and fat than a standard meatloaf. Also I am down six pounds now and that is keeping me motivated.

This turkey meatloaf is from the Barefoot Contessa and I have been making it for a few years now. I have always loved it. It just occurred to me that it would fit in well with our eating program, so we invited our fellow Weight Watcher friends over for dinner last night and shared it with them. It makes a lot of meatloaf. I halved the recipe and we still had leftovers. Hmmm, maybe a meatloaf sandwich for lunch eaten over the sink today with mayo dripping seductively around the edges . . . no . . . better hold the mayo for now. Oh well, don’t get bored with me. We are going to Key West next week and I promise pictures of Sloppy Joe’s Bar. But I may not eat one. Do you think Hemingway would approve?

In a medium saute pan, over medium-low heat, cook the onions, olive oil, salt, pepper, and thyme until translucent, but not browned, approximately 15 minutes. Add the Worcestershire sauce, chicken stock, and tomato paste and mix well. Allow to cool to room temperature.

Combine the ground turkey, bread crumbs, eggs, and onion mixture in a large bowl. Mix well and shape into a rectangular loaf on an ungreased sheet pan. Spread the ketchup evenly on top. Bake for 1 1/2 hours until the internal temperature is 160 degrees F. and the meatloaf is cooked through. ( A pan of hot water in the oven under the meatloaf will keep the top from cracking.) Serve hot, at room temperature, or cold in a sandwich. I did not use the pan of hot water. 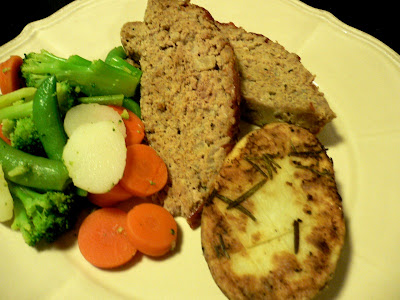