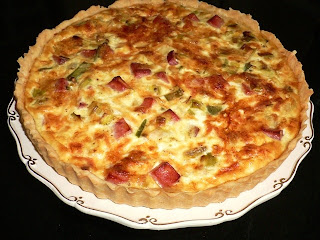 Pie crust has always been easy for me. I know many cooks claim to be intimidated by the prospect of making homemade pastry, but for some reason, I enjoy the mixing, rolling, trimming and crimping. It probably has alot to do with my Mother and Grandmother. I grew up in a small town in Michigan in the house where my Mother was born. My Grandmother lived with us and the two of them were always in the kitchen fixing comforting meals. When my brother and I were small, Grandma did a lot of the cooking, but over the years Mom took over most of it, with Grandma in the background offering encouraging comments like ” You aren’t going to have any potatoes left with the way you are peeling them”, or ” That pot roast is going to be dry if you don’t add more water.” But one thing they always agreed on was how to make pie crust. I have even inherited the measuring device they used for their Crisco. They never used butter in their pie crusts and I am sure that in her younger days my Grandmother probably used lard. So here is their recipe for pie crust if you would like to give it a try. For a 1 crust pie, use 1 cup of flour (with 1/4 tsp. salt), 1/2 cup Crisco cut into flour with a sharp knife until the shortening is the size of small peas, and then 1/4 cup milk stirred in. The ratio of 1, 1/2, 1/4 is easy to remember. A two crust pie would be 2,1,1/2. The dough is then rolled out on a heavily floured board. It is a very forgiving dough and can be rerolled without toughening it if you don’t get it right the first time. I have used this recipe for years, but have also discovered the flaky texture of pate brisee, the all butter alternative. And I have used some recipes that call for a mixture of both shortening and butter. But what I am sharing with you today is a pastry dough that I had never heard of before. It is made with olive oil. 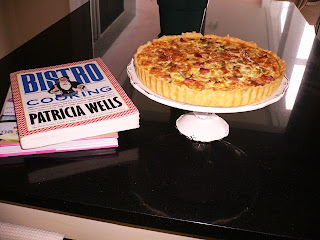 In her book Bistro Cooking, Patricia Wells talks of a version of tart that is made in Provence with the local olive oil. The dish she describes is made with Swiss Chard, but having made it before, I found it to be too heavy and unappealing. I did like the crust though, so I came up with my own filling and tweaked the ingredients slightly for the crust. The advantage of this crust is that, when mixed together, it has the consistency of a cookie dough and all you have to do is is pat it into the tart pan. It does not have the buttery flakiness of most pie crusts, but it is crisp and thin and best of all, simple.
SAVORY LEEK AND HAM TART
Pastry:
1 1/4 cups unbleached all-purpose flour
1/4 tsp salt
1/4 cup plus 2 Tbls water
1/4 cup good extra virgin olive oil
Filling:
4 leeks, green stems removed, washed well and chopped
2 Tbls. olive oil
1/2 cup diced ham

1 cup half and half or heavy cream
Dash of nutmeg

Preheat the oven to 400 degrees. For the pastry, combine the flour and 1/4 teaspoon salt in a medium size bowl. Stir in the water and then the oil, mixing until thoroughly blended. Knead briefly. The dough will be very moist, much like a cookie dough. Press the dough into a 10″ loose-bottomed metal tart tin.

Saute the leeks in the heated oil over medium low heat until limp. Add the ham and brown slightly. In a bowl combine the beaten eggs, cream and nutmeg. Place the leek mixture into the prepared tart tin. Top with grated cheese. Pour the egg mixture over all and place in oven and bake for 40 minutes. 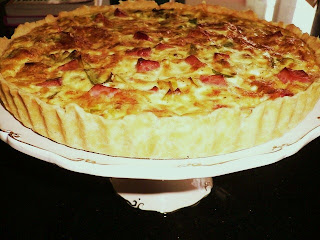