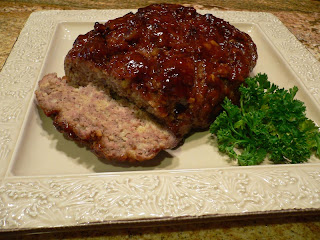 My Mother loved this ham loaf. She became known for this ham loaf. She served it at so many family get togethers that some in the family grew tired of it. But now that she is no longer with us, I make this in celebration of her spirit. She was an amazing cook and eating at her table was an event not to be missed. There were always at least six different dishes, each cooked with love and care. She would start early in the morning cooking and prepping at her small corner countertop and I was always amazed at her ability and precision. She was an accomplished artist and she brought that creativity to everything that she touched. She also had a sweet tooth and the glaze that covers this ham loaf makes you fight over the end pieces. She always enforced the cook’s perogative to get first dibs on the end piece. And since she usually made two three pound ham loaves, there was plenty of glazy goodness for the diehard sweets lovers.
A ham loaf makes an inexpensive alternative to the traditional Easter ham. The hardest part in preparing this dish is finding ground ham. Back in the day, you could ask your butcher to grind a center cut ham steak with a pound of ground beef. Lately, the supermarkets I have visited will not do it for you because they fear cross contamination in the meat grinder. I have a meat grinding attachment on my stand mixer so I buy a center cut ham steak, grind it, and mix it with the ground beef.
While this was in the oven last night, David said “it sure smells like ham loaf in here”. I smiled and thought “it sure smells like Mom’s kitchen in here”. Happy Easter. We will be with our kids and grand daughter Rachel for the next few days.
HAM LOAF
1 pound ham steak, ground
1 pound ground chuck
2 eggs, beaten
1 cup milk
2 cups saltine crackers, crushed
2 teaspoons mustard
1/2 cup vinegar
2/3 cup brown sugar
Preheat oven to 325 degrees. Combine the first five ingredients and form into a loaf. Score top diagonally in both directions with knife (about 1/4 ” deep). Mix together the mustard, vinegar and brown sugar in a small sauce pan and heat and whisk until mustard is combined and sugar is dissolved. Set pan aside. Bake the ham loaf in a baking pan somewhat larger than the ham loaf so that the glaze will have room to caramelize. Bake the ham loaf for one hour. Pour sauce over the meat and bake an additional one hour, basting frequently, especially during the last 1/2 hour. 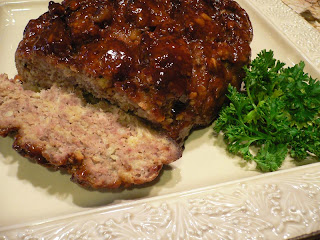