Rice Lentil Pilaf and Learning From the Past 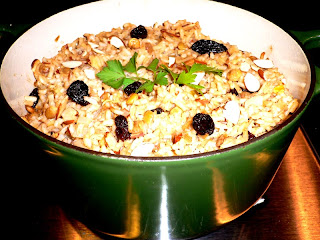 We bought a place in the country in 1977. We were reading The Mother Earth News magazines and other” back to the land movement” publications of the era and wanted to be as self sufficient as possible. The house that came with the property was a veritable shack, long ago abandoned with broken windows and critter droppings everywhere. At the time we were young and idealistic, full of energy and up for anything it took to accomplish our goals. My husband is an engineer and at the time he was doing research in solar energy applications and because the house had a good southern exposure, he was sure we could add on to the existing structure and create a solar heated home. I won’t go into the details here because this is supposed to be about the food (remember?), but we would have been better off tearing the whole thing down and starting from scratch. But, after a lot of hard work we ended up with a very nice house where we raised our son and remained until we retired two years ago.
For a time we had a large vegetable garden and chickens and I have to tell you that I miss the fresh eggs. This is a shot of our son, Michael, in 1980 with the king of the hen house. 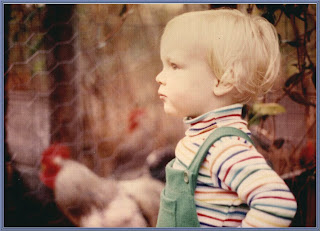 There’s one thing I don’t miss . . . the pigs. They were wily pigs. There were two of them. There was already a chicken coop and a pig pen of sorts on the property so we thought it would be “way cool” to raise our own meat. Those pigs seemed to know what was in store for them, because their whole mission in life was to escape. They would throw themselves at the pen door until the wooden peg holding it shut would give way and set them free to run. One time when my parents were visiting, I looked out the kitchen window and there was my Dad, holding the pen door shut and apparently yelling for someone to come and help him as the pigs repeatedly banged against the unsecured door. But the kicker was the time I had to call the University where David taught and have his secretary announce to everyone within earshot “Dr. Klett, your wife is on the phone. Your pigs are out again and you need to go home.” The pork chops were excellent.

Also during this era one of my favorite cookbooks was Laurel’s Kitchen. Laurel was a clog wearing, long peasant skirt kind of gal who baked her own bread and lived in a commune. We were obviously not vegetarians like she was, nor commune wannabes, but there were many good dishes in this cookbook that are still relevant today in our health conscious, whole-grain leaning society. I would say her wisdom has stood the test of time. So finally, I’ve gotten to the subject of this post. I love Laurel’s recipe for Rice Lentil Pilaf and have been making it for years. It makes me feel virtuous and healthy with the added bonus that it tastes good. I think the hint of cinnamon does it for me. So take a page from the past and give this pilaf a try. Some things are meant to be repeated. Rebuilding another old house? Why in the world are we doing that again? Sometimes we don’t learn from the past. But I have learned from at least one past mistake . . . Pork is best when purchased from a store.

RICE LENTIL PILAF
1/2 onion, chopped
2 Tbls oil
1 cup brown rice
1/4 cup lentils
1/4 tsp cinnamon
2 1/2 cups water
1 Tbls tomato paste
1/2 tsp salt
1/2 cup golden raisins ( or dried cranberries )
1/2 cup slivered almonds
Saute onion in 1 tablespoon of the oil in a large saucepan until it is soft. Add rice and cook, stirring for several minutes. Mix tomato paste with water and cinnamon. Add this along with the lentils to the saucepan. Bring to a boil, cover, and turn heat to low and simmer for 30 minutes.
Preheat oven to 350 degrees. Coat a baking dish with the remaining tablespoon of oil. Add the salt, nuts and raisins to the rice mixture and pour into casserole. Cover and bake the casserole for 20-30 minutes. Makes 6 servings. 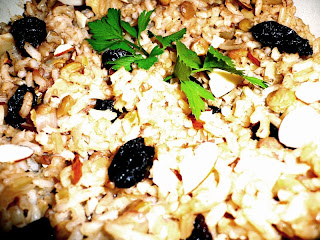 15 responses to “Rice Lentil Pilaf and Learning From the Past”