Souffle Aux Epinards and an Ode to Julia 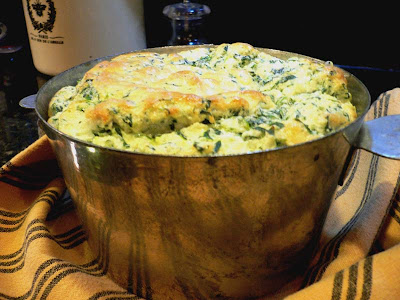 Julia Child was my Muse. I was married in 1966. After a brief honeymoon on the shores of Lake Michigan and time spent in Gatlinburg,Tennessee, we headed for Florida where my husband would be attending graduate school. Some of my constant companions in the car on the way south were my cookbooks. I was just learning to cook and it fascintated me. When Julia Child first appeared on television I was hooked. We eventually moved to Greensboro, North Carolina and I had the opportunity to take cooking classes from Irena Chalmers who had the most enticing french cooking school and shop. I bought my first copper pan and Le Creuset braising pot from her. She taught me many of the basics of French cooking and she is still teaching today at the CIA. But there was always Julia. I bought Mastering the Art of French Cooking in 1971.

Last night I decided to make her spinach souffle. I did not start it until 6:00. I had already brought the eggs and frozen spinach to room temperature. I was confident; maybe a little cocky. I loved the movie Julie and Julia, by the way. Meryl Streep and Stanley Tucci were magnetic as Julia and Paul and the scenes of 1950’s Paris were mezmorizing. I wanted the whole movie to be about them. Amy Adams as Julie did her best, but I found her character sometimes whiny and annoying. Why couldn’t she have the joie de vivre of Julia? Cooking is supposed to be fun after all. I made my white sauce, grated the cheeses, squeezed the spinach dry and separated my eggs. One of the eggs broke strangely and I got a little yolk in the egg whites in the bowl of my Kitchen Aid. “Oh well, it was just a little”, I told myself. I added the egg yolks to the spinach mixture and turned on the mixer to whip the egg whites. I whipped and whipped and they refused to froth. It became clear to me that they were never going to whip and I was out of eggs. By this time it was close to 7:00. The grocery store in Lake Lure is twenty minutes away, but the gas station at the bottom of the hill is close. I ran to the car and negotiated the curving road to town. The gas station store had just closed at 7:00. I banged on the door like a crazy woman and the owner opened up for me. Unfortunately he was out of eggs. I had no choice but to continue around the lake to the Ingle’s store. I got back home at about 7:45 with a carton of cold eggs. I cleaned out the bowl of the Kitchen Aid, added the egg whites one at a time after first breaking them into a small bowl ( a good tip by the way ) and started the mixer again. The eggs immediately did what they were supposed to do. I folded them into the spinach mixture and poured the whole into my souffle dish, actually my charlotte mold. I learned a trick from Ina Garten to help a souffle puff. Run a spatula in a circle about an inch in from the edge all the way around and the center will puff. Finally I had the dish in the oven. I was exhausted and I didn’t know if the cold egg whites would hinder the souffle from rising. I was also a little cranky. Where had I seen that before? It was a humbling experience.

The souffle finally came out of the oven at about 8:45, fashionably late and not as tall as I would have liked, but looking and smelling delicious. As Julia would say, “Never apologize”. We dug in with gusto.

Preheat the oven to 400 degrees. Butter a 6 cup souffle dish and sprinkle it with Parmesan cheese. Melt the butter in a heavy sauce pan and add the flour. Cook and whisk for about a minute. Add the hot milk off the heat and whisk until it is thick. Return to low heat if it does not thicken. Again off heat, add the two cheeses to the mixture. Separate the eggs in two bowls, discarding or saving one of the egg yolks. Beat the egg yolks. Slowly add the egg yolks to the cheese sauce while whisking. Add the seasoning and spinach and stir to combine.

Add the 1/8 tsp cream of tartar to the egg whites and beat them until firm and glossy peaks form. Whisk one quarter of the egg whites into the cheese sauce to lighten, and then fold in the rest. Pour into the prepared souffle dish, then smooth the top. Draw a large circle on top with the spatula and place in the middle of the oven. Turn the temperature down to 375 degrees. Bake for 30 to 35 minutes until puffed and brown. Serve immediately. 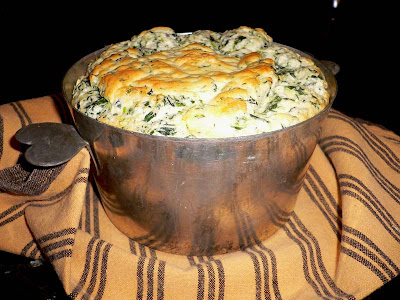 15 responses to “Souffle Aux Epinards and an Ode to Julia”