Home Alone with Soup and a Movie 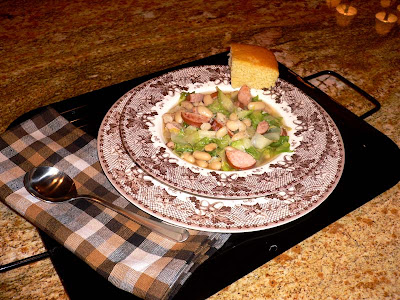 What do you do when you are faced with time alone? Sometimes I like to curl up with a good book and do nothing all day; no one to cook for, no extra laundry, no renovation projects to deal with. It is nice for a few days, but I can take only so much of it. David is on a two week motocycle ride with his buddies. I spent the first few days visiting my Son, Daughter-In-Law and Granddaughter. Since I have been home I have been somewhat slothful, cooking my favorite comfort foods like hamburgers, macaroni and cheese and an actually yummy quiche lorraine from Mastering the Art of French Cooking. The week has been rainy and cool – the kind of weather that begs for warming, bubbling soup. So yesterday I donned my sweats, pulled out one of my easiest soup recipes and puttered in the kitchen while the soup simmered. 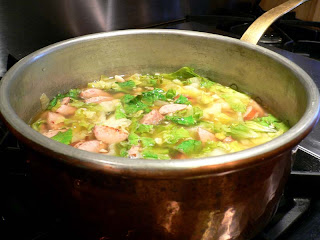 I have been making this escarole, white bean and sausage soup for years. It is easy and quick and very satisfying. I always have cannellini beans and chicken broth in my pantry so it requires few things from the grocery store.
I love making a tray to eat in front of the television to watch one of my favorite DVDs; movies that David does not necessarily love. Here are a few of my favorites.
Grey Gardens – This movie fascinates me. It is the true story of Jacqueline Kennedy’s Aunt Edie Beale and her daughter “Little” Edie. Their descent into mental illness, co-dependency, and isolation is unbelievable. Their beautiful estate in the Hamptons decays around them. It has recently been restored by Sally Quinn. Drew Barrymore’s portrayal of Little Edie is worthy of an Oscar. There was a documentary featuring the real Beales and Drew Barrymore nailed her role as Little Edie.
The Holiday – The movie itself is somewhat predictable, but the two homes featured are stunning in different ways. It is the story of two women in the throes of relationship problems who decide to swap houses for the holidays. Kate Winslett’s character lives in an English cottage into which I could move today and live happily ever after. Cameron Diaz lives in a sleek mansion in LA. It doesn’t hurt that Jude Law is one of the love interests. I have watched it several times just to study the houses . . . ok, ok, Jude Law too.
Something’s Got to Give – What’s not to love about Diane Keaton and Jack Nicholson? But again it is the house in the Hamptons that I love. Do you see a pattern here? I love houses.
David will be facing his “home alone” time next week. My biker babe girlfriends and I are going to New York City for four days of shopping and a Broadway show (Jersey Boys). We have reservations at Mesa Grill for dinner one night. Before I give you the recipe, here are two questions. What are your favorite DVDs? And if you have any suggestions for good restaurants in NYC, I could use them. I am tired of “home alone” and could use some fresh ideas.
ESCAROLE, WHITE BEAN AND SAUSAGE SOUP
1 Tablespoon olive oil
1 small onion, chopped
3/4 pound Kielbasa or Sausage of choice, sliced or diced
4 cloves garlic, minced
3 cans low sodium chicken broth
2 15 ounce cans cannellini beans, drained and rinsed
1 bunch escarole, washed and roughly chopped
1/2 cup freshly grated Parmesan cheese
Heat oil in heavy large saucepan or dutch oven over medium high heat. Add sausage and onion and saute until lightly browned, about 8 minutes. Add chopped garlic near end of cooking time. Add the beans and chicken broth and simmer to meld the flavors, about 20 minutes. Add the escarole and simmer until wilted. Ladle soup into bowls and sprinkle with Parmesan cheese. 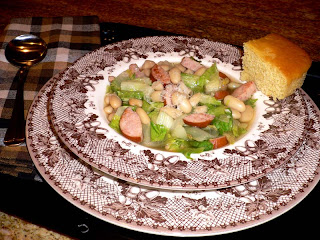 22 responses to “Home Alone with Soup and a Movie”