A Dinner Party From the Past 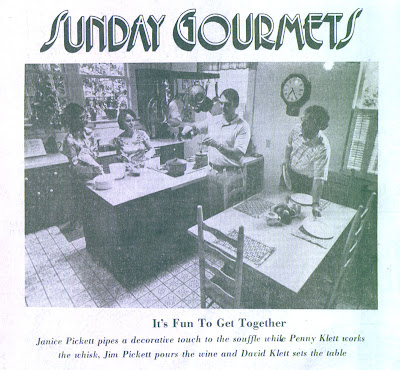 The above picture appeared in our newspaper back in 1975. It is so funny to look at this again. I was so skinny and David had lots of hair! That is the kitchen in the first house that we bought. It was this sunny kitchen that sold me on the beautiful old house. Our friends Jim and Janice were the first people that we met in Greensboro. They lived next door to us in our first apartment and Janice and I took cooking classes together. They later moved away from Greensboro, raised a family and we lost touch. Recently we have reconnected and Jim and Janice just moved to Black Mountain, just over the ridge from us. We decided that it would be fun to get together and cook again. Janice and I recreated the menu from 1975. The recipes all came from our cooking instructor Irena ( Kirshman ) Chalmer’s cookbooks published by Potpourri Press. 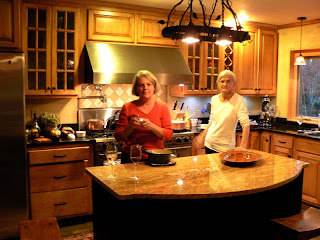 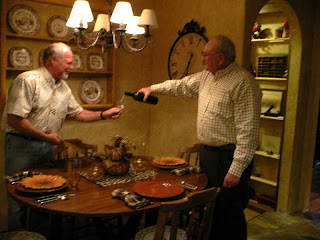 Here we all are, a little older but still having lots of fun, the girls taking their positions behind the counter and the guys pouring wine and setting the table. Since Jim was pouring in the old picture he is doing the honors again.

The first course for our dinner party is Coquilles Saint-Jacques Nantaise or Scallops with shallots, butter and breadcrumbs. I have to warn you, this is rich with lots of butter even though I cut back some, but it was delicious. Click on the name for the recipe. 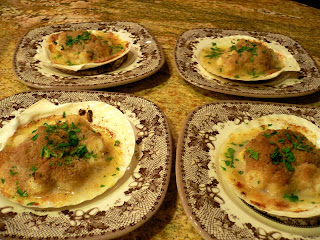 The entree was Tournedos Henry IV with Artichoke Bottoms and Sauce Bearnaise. There is more butter in this, but the bearnaise sauce is worth it. It took the two of us to make the bearnaise. The filets are flattened, cooked in clarified butter and then flamed in brandy. They are topped with the artichoke bottom holding the bearnaise sauce. This dish was sublime. 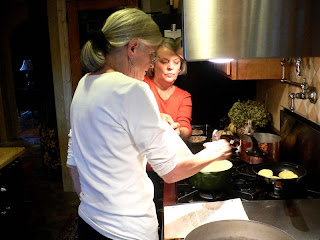 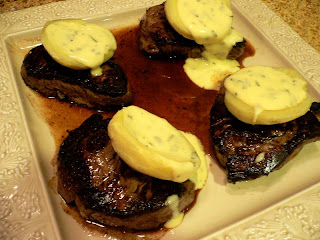 We served simple roasted potatoes and asparagus with this. We roasted the halved potatoes drizzled with olive oil and rosemary skin side down for about 20 minutes. We then added the asparagus tossed in oil to the pan and continued roasting until done. 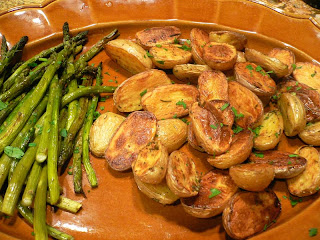 After all that decadence we decided that we wanted something light and easy for dessert. We made a Raspberry Whip. This is nothing more than whipped egg whites to which you add a little sugar, raspberry preserves and framboise or raspberry liqueur. What is so great about this dessert is that you can adapt it to many flavors; perhaps orange marmalade with Grand Marnier. 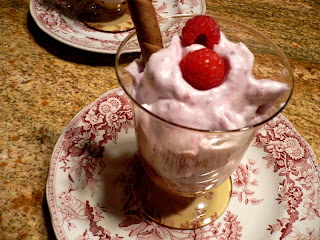 We had such a good time doing this meal. It is not often that we eat like this anymore but it was well worth it to bring back some of these classic recipes. Cooking together with friends is one of the joys of life.

21 responses to “A Dinner Party From the Past”