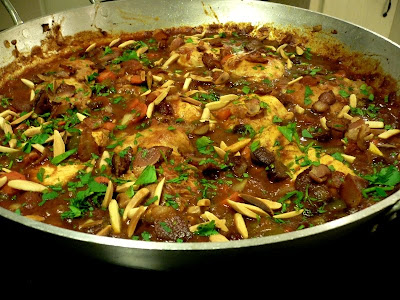 “The Lee Bros. Southern Cookbook makes me daydream of a long ago summer on a Pawleys Island back porch, the aroma of the marsh and the dinner table mingling with laughter of many generations of families and a few too many glasses of wine. Oh to the magic of being at table together in the South.” –Frank Stitt, author of Frank Stitt’s Southern Table

While browsing in an artists’ co-op in historic downtown Sanford, I found a bookmarked copy of The Lee Bros. Southern Cookbook. The book belonged to the group of artists who had just hosted a studio walk and had made recipes from this recently published cookbook; wonderful things like St. Cecilia Punch, cheese straws and spiced pecans. While my husband was looking at the artwork I stayed with the cookbook and found many tantalizing recipes.

The Lee brothers grew up in Charleston, SC but now make New York City their home. They are food writers for the New York Times and have a mail order company for all things southern. On a snowy winter day back in 1994 in a tiny tenement apartment on the Lower East Side of Manhatten the brothers made their first batch of boiled peanuts. They were homesick for this regional favorite. They found other expat southerners who loved the peanuts and needed a fix and the mail order business was born. In order to expand their line of southern specialties they traveled from Kentucky to Northern Florida finding sources for such esoteric foods as sorgham molasses and fig preserves. They learned what made a good barbecue sauce from the vinegar based Eastern North Carolina sauce to the South Carolina mustard based sauce. Their searches began to be chronicled in such magazines as Food and Wine and Travel and Leisure.

I had to have the cookbook. It is a compilation of recipes from all regions of the south and many from their native Charleston. The first recipe I made from the cookbook was Country Captain. I have been making a version of this for many years. It is a mainstay of Junior League cookbooks all over the south. The port of Charleston saw many products from the orient in the eighteenth and nineteeth centuries. Curry powder was one of them. This dish became very popular during FDR’s presidency when it became his favorite while vacationing in Warm Springs, Georgia. According to the Lee brothers a southern curry is not a fiery thing and it is often softened further by sweet raisins or currants. I find that the curry flavor is not at all pronounced.

The country captain makes a good dish for a buffet. I made it with a combination of chicken thighs and boneless chicken breasts which I added to the liquid after the thighs had cooked for awhile. It is visually lovely with the red tomato sauce, browned almonds, plump cranberries (my substitution) , bacon, and green parsley. Serve the dish over rice.

2. Pour the broth into a small saucepan and bring to a boil over high heat. Place the currants in a small bowl and pour enough broth over them to cover; let stand. In another small bowl, combine the curry powder, salt, and pepper and reserve.

3. Scatter the bacon in a 3 to 4 quart enameled cast iron pot or Dutch oven over medium high heat. With a slotted spoon, move the pieces around occasionally until the bacon is firm and crisp. With the slotted spoon, transfer to a small bowl lined with paper towel and reserve.

4. Pour off all but 2 tablespoons of fat from the pot, reserving the excess fat in a small bowl. Brown the chicken pieces in batches over medium high heat, taking care not to crowd them in the pot, until they are golden brown, about 5 minutes per side. Add the reserved bacon fat 1 teaspoon at a time if the pot becomes too dry. Remove the chicken and reserve in a medium bowl.

5. Add the carrots, bell peppers, onions and garlic to the pot and cook until slightly softened, about 6 minutes. Add the tomatoes, spice mixture, ginger, and currants and their broth, reduce the heat to medium low, and simmer until the tomatoes have cooked down to a puree and the sauce has thickened around the vegetables, about 8 minutes.

6. Nest the chicken thighs gently in the vegetable sauce. Cover the pot and transfer to oven. Bake for 20 minutes. Remove cover, add the chicken breasts and bake uncovered for an additional 20 minutes.

7. Remove from oven and sprinkle with almonds, bacon and parley. Serve over rice. 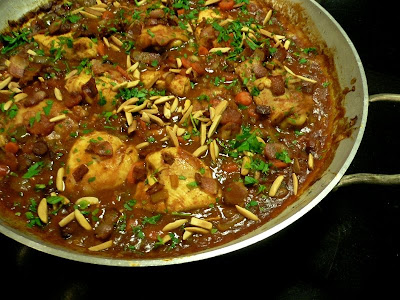