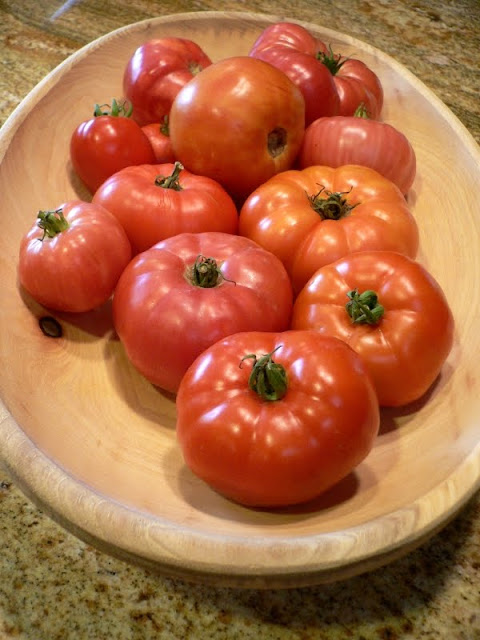 The only vegetables thriving in our garden right now are the tomatoes.   We have had very little rain so the squash and cucumbers have succumbed and the pepper plants are not producing blossoms.  In the spring the garden shows so much promise, but the vagaries of summer can dash one’s hopes for a bountiful harvest.  But the tomatoes are beautiful and we have been enjoying them on sandwiches and on toast for breakfast.
One of my favorite ways to enjoy tomatoes is in a panzanella salad and as luck would have it the Barefoot Blogger founder, Tara of Smells Like Home, has chosen one of Ina Garten’s panzanella salads as one of the BB recipes of the month.  She chose Ina’s Greek Panzanella and you can go here for the recipe.  That recipe includes calamata olives and feta cheese.  I chose to do Ina’s standard panzenlla salad which has no cheese, but lots of fresh garden vegetables, warm croutons to soak up the juices, and a garlic and mustard vinaigrette.  By the way I want to thank Tara for keeping the Barefoot Blogger’s website active and for tracking the 198,593 Friday night dinners we have cooked for Jeffrey.   You would think he would thank us.
I would also like to include this recipe in the Two for Tuesdays blog hop.  We are a group of bloggers who post about Real food and stress the importance of local, fresh, and unprocessed food.  Check out Girlichef’s blog for a listing of all of recipes for this Tuesday.
PANZANELLA SALAD
3 tablespoons good olive oil
1 small French bread , cut into 1 inch cubes ( 6 cups )  I used a Sourdough baguette
1 teaspoon kosher salt
2 to 3 large, ripe tomatoes, cut into 1 inch cubes
1 hothouse cucumber, unpeeled, seeded, and sliced 1/2 inch thick
1 red bell pepper, seeded and cut into 1 inch cubes
1 yellow bell pepper, seeded and cut into 1 inch cubes
1/2 red onion cut in half and thinly sliced
20 large basil leaves, coarsely chopped
3 tablespoons capers, drained
For the Vinaigrette:
1 teaspoon finely minced garlic
1/2 teaspoon Dijon mustard
3 tablespoons champagne vinegar (I used red wine vinegar)
1/2 cup good olive oil
1/2 teaspoon kosher salt
1/4 teaspoon freshly ground black pepper
Heat the oil in a large saute pan.  Add the bread and salt; cook over low to medium heat, tossing frequently, for 10 minutes, or until nicely browned.  Add more oil as needed.
For the vinaigrette, whisk together the ingredients.
In a large bowl, mix the tomatoes, cucumber, red pepper, yellow pepper, red onion, basil, and capers.  Add the bread cubes and toss with the vinaigrette.  Season with salt and pepper.  Serve, or allow the salad to sit for about half an hour for the flavors to blend.
Note:  If you are not eating the whole salad in one sitting, add only half the croutons to half of the salad and reserve the rest separately for a second serving.  This will keep the croutons crispy the second time around. 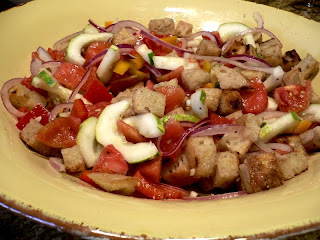