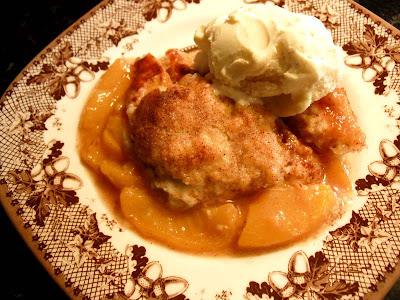 “The cobbler is simple.  It’s homey, nothin’ fancy.  It cuts across socio-ecomonic lines and is eaten in red and blue states alike.  It’s history is one of immigrant innovative spirit.  A Peach cobbler is as American as Apple Pie.”  Kim O’Donnel – The Washington Post.
Our English ancestors brought us the fruit pies which they had baked in brick ovens for centuries.  When they arrived in America, they were forced by the primitive conditions to do most of their cooking over open fires. They put their sliced fruits in heavy cast iron pans and placed them in the coals to cook.  They added a topping of biscuit dough to them and placed a heavy lid on top so that the biscuit dough could rise and brown.  Thus the cobbler was born.
In the South, peaches were plentiful.  I can imagine the early settlers made cobblers because of the availability of the fruit and the frugality inherent in their makeup.  Nothing went to waste in the humble homes of our ancestors.  If biscuits were made for breakfast, any leftover dough could be used for a sweet cobbler.
Today in the South, most of the Meat and 3 style restaurants and the Barbecue restaurants feature peach cobbler on the menu.  It is a tradition and one that I have come to love.  I love cobblers, crisps, crumbles,  grunts,  pandowdies, buckles, brown betties and sonkers.
But my favorite by far is peach cobbler and this recipe from All Recipes is the best.  The peaches are flavored with sugar, cinnamon and nutmeg.  The biscuit topping is rich with butter and sprinkled with cinnamon sugar.  Served warm with a scoop of ice cream, this is the flavor of late summer and perfect eaten while on the porch in the evening watching the fireflies and listening to the cicadas.
SOUTHERN PEACH COBBLER
8 Fresh Georgia peaches – peeled, pitted and sliced into wedges
1/4 cup white sugar
1/4 cup brown sugar
1/4 teaspoon ground cinnamon
1/8 teaspoon ground nutmeg
1 teaspoon fresh lemon juice
2 teaspoons conrstarch
For the biscuit topping:
1 cup all-purpose flour
1/4 cup white sugar
1/4 cup brown sugar
1 teaspoon baking powder
1/2 teaspoon salt
6 tablespoons unsalted butter, chilled and cut into small pieces
1/4 cup boiling water
For Topping:
3 tablespoons white sugar
1 teaspoon ground cinnamon
Preheat oven to 425 degrees F
In a large bowl, combine peaches, 1/4 cup white sugar, 1/4 cup brown sugar, 1/4 teaspoon cinnamon, nutmeg, lemon juice, and cornstarch.  Toss to coat evenly, and pour into a 2 quart baking dish.  Bake in preheated oven for 10 minutes.
Meanwhile, in a large bowl, combine flour, both sugars, baking powder, and salt.  Blend in butter with your fingertips, or a pastry blender, until mixture resembles coarse meal.  Stir in water until just combined.
Remove peaches from oven, and drop spoonfuls of topping over them.  Sprinkle entire cobbler with the sugar and cinnamon mixture.  Bake until topping is golden, about 30 minutes. 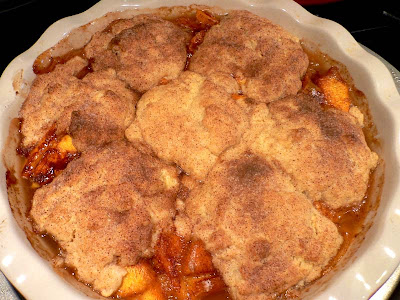 I am linking this recipe to the Two for Tuesdays blog hop carnival.  Go to Girlichef’s blog to view all of the links to blogger’s who are cooking up “Real” food;  food that is not processed and the kind of food that your Grandmother might have made.