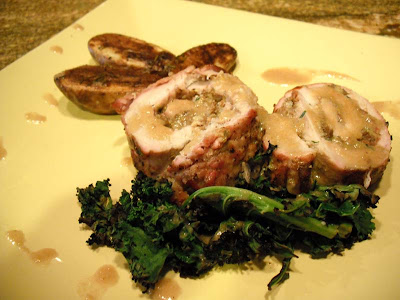 David’s back has been bothering him lately.  He has been busy finishing the lower level of the cottage because we have 14 family members coming for the Labor Day Weekend.  He does most the work in the morning, but sometimes by early afternoon he has to sit down in his comfy chair and relax.  Therefore, he has been watching a lot of Food TV.  He has printed out more recipes than we can possibly get to.  But this recipe sounded so good to him, that he actually went to the grocery store and bought the ingredients.

It was a collabortive effort.  I got the pork tenderloin ready for the grill and he made the beurre blanc.  The pork tenderloin is butterflied and pounded very thin.  I took a great picture of the tenderloin flattened between two sheets of plastic wrap and a picture of the stuffing being wrapped up in the meat, but my memory card has been acting up and the pictures were lost.  Here are instructions if you have not done this before.  Place the tenderloin on a cutting board so one end is facing you.  Cut the meat almost in half starting at the top of one long side.  Leave about 1/2 inch not cut.  Open the meat up like a book.  I took it a step further and made small cuts on either side of the original cut but not all the way through.  This made it easier to pound.  Once the stuffing is made you spread it over the rectangle of meat.  It is then rolled up starting at the short end nearest you.  Tie with kitchen twine. 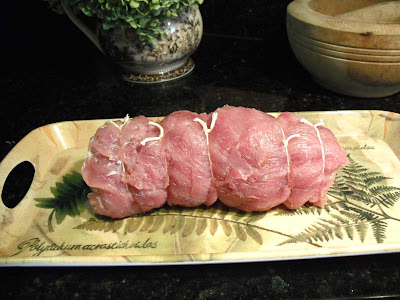 The stuffing is so good.  You can’t go wrong with shallots, garlic, mushrooms, andouille sausage, cornbread and a splash of whiskey.  I want to use this stuffing in other dishes.  It is a mixture that  inspires the creative process.  With more cornbread it could become the dressing for Thanksgiving.  Just be aware that you have to make cornbread before you can begin this recipe.

Now on to the grilled peach whiskey beurre blanc.  OMG! 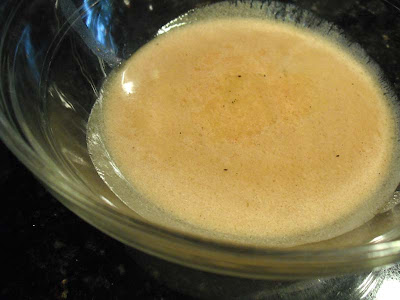 That innocent looking white sauce is worth every minute of the time it took to make it.  Just think about it; the flavor of warm grilled peaches, shallots and ginger, heavy cream, honey and whiskey, with a hint of heat from a habanero chili, all pressed through a fine sieve and enriched with butter.  It is smooth and so layered in flavor that I will make this again and again to serve on salmon and any number of meat dishes.  It is now a permanent part of my cooking arsenal.

David grilled the meat after drizzling it with oil and salt and pepper. 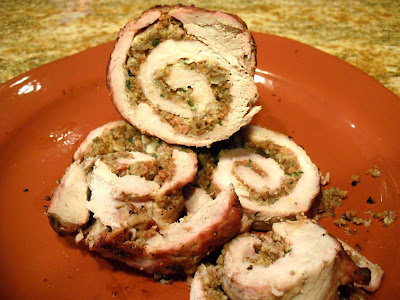 The stuffing made a nice spiral effect even though I did very little to make this platter look pretty.  What was I thinking?  I think I was tired.  But I mean it when I say the work was worth it.  If you plan ahead you can butterfly and tie the tenderloin way ahead of time.  The beurre blanc can also be done ahead and warmed in it’s bowl over a pot of  boiling water.  The recipes come from Claire Robinson as seen on Bobby Flay’s Grill It.  The recipe uses two pork tenderloins.  I halved the recipe.

Directions for Stuffing:
Put the shallot, garlic and mushrooms in the bowl of a food processor.  Pulse until finely chopped.  Add the sausage, again pulsing until incorporated with the mushroom mixture.  Season with salt and pepper, to taste.  Pulse again.

Heat the oil in a large saute pan over medium high heat.

Add the mushroom-sausage mixture and cook until the liquid has evaporated, about 8 to 10 minutes.

Deglaze with a splash of whiskey, using a wooden spoon to scrape up the brown bits stuck to the bottom of the pan.

Remove the pan from the heat and add the crumbled cornbread and parsley,  Mix to combine.  Set aside.

Directions for Pork:
Cut tenderloins lengthwise, but not through, to open and lay flat.  Lightly pound to even the meat.  I pounded it very thin.  Paint the tenderloins lightly with mustard, then add the stuffing mixture.  Roll up the tenderloins from the short end and tie the middle of the roll with kitchen string to secure.  Repeat the ties about every 1 to 2 inches.  Drizzle with oil, season with salt and pepper, to taste, and put on the grill to sear.  Remove the tenderloins from direct heat to indirect heat and tent with foil.  Grill until the internal temperature registers about 140 to 145 degrees F on an instant-read thermommeter, another 15 minutes.  Remove the tenderloins to a cutting board and let rest before slicing into medallions.

Lightly oil the peach halves and put on the grill for 3 to 5 minutes to slightly soften, flavor and mark.  Melt 1 tablespoon of butter in a large saucepan and add the shallots, habanero and ginger.  Saute for about 1 to 2 minutes.  Chop the peaches, add them to the pan and cook for 1 minute.  Remove the pan from the heat to add the whiskey and then return to the heat to cook until the liquid is reduced by half.  Add the cream and the honey and allow it to reduce again by half.  Strain and finish the sauce by slowly whisking in the cold butter. 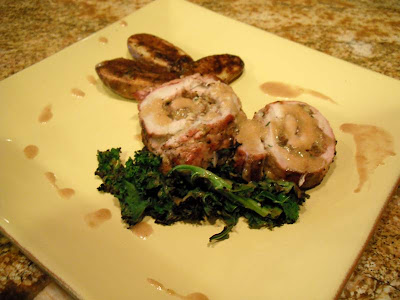 On another subject, I want to tell you about a new blogger who has joined our midst.  Leslie emailed my a few months ago to compliment me on my blog and had questions about starting a blog of her own.  She and her family have a winery in California and she wanted to write about  her life at the winery, events that they have planned, the process of winemaking and recipes.  She launched her blog recently and I thought it would be nice to give her some support.  You can visit her at The Days of Wiens and Roses Blog.  Good luck Leslie.  I am enjoying your blog.