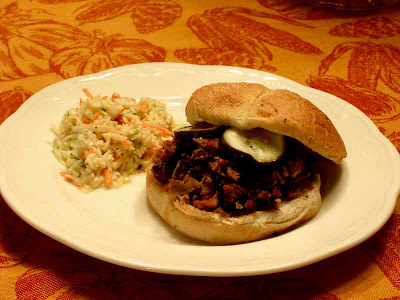 David (Mr Lake Lure Cottage Kitchen) here again. Penny asked me to write about some of our Labor Day food….specifically, the BBQ part that I was responsible for. We had a house full of extended family here for the long weekend, and everyone pitched-in in the kitchen.  Needless to say we ate well…you might even say “high on the hog”, at least as high as the shoulder.

As of late, I have been inspired by another Dave, the one responsible for the blog My Year On The Grill (MYOTG),  not to mention the inspiration I always get from Bobby Flay and The Neely’s on The Food Network.  It was actually a Neely’s episode back in April about how to smoke spare ribs at home that inspired me buy a Char-Griller off-set charcoal smoker grill.  I christened the grill by cooking some ribs following the Neely’s dry rub recipe and techniques, and I must say they were some pretty tasty ribs.  I was then ready to step it up a notch and tackle some Carolina Pulled Pork, i.e. Pork Butt, which is kind of an odd name for what is in reality a pork shoulder. For detailed instructions on smoking a Pork Butt (it’s a lot more fun to say than shoulder) I referred to MYOTG.  MYOTG Dave is doing for Steve Raichlen’s book How To Grill what Julie Powell did for (or some might say to) Julia Child’s Mastering The Art Of French Cooking…cooking his way through the book, one recipe at a time. Dave has many detailed recipes and instructions on his blog, and his info on Pork Butts was exceedingly helpful in my quest to achieve a nice Butt.  I was particularly interested in his comments on using coffee in the dry rub. After reading MYOTG’s musings on pork butts and studying Steve Raichlen’s and Pat Neely’s recipes, and never being one to leave-well-enough-alone, I concocted my own java dry rub with this formula.

The only picture I thought to take during the Butt cooking process was this one showing the rub on the raw Butt, which I then let sit in the fridge over-night. 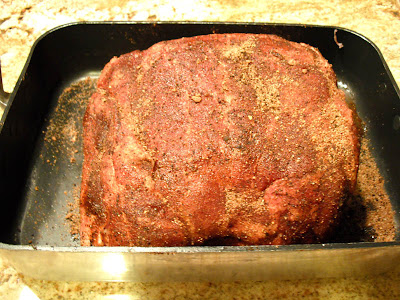 For the mop sauce and Carolina vinegar finishing sauce I made up some of MYOTG’s  Raspberry Chipotle Sauce Concentrate and added it to Steve Raichlen’s standard mop and vinegar finishing sauce just like Dave suggested.  I forgot to take a picture of the butts on the grill or after they had cooked for 9 hours, so the only photo of the finished product is the sandwich shot above.

For sides, we did MYOTG’s Blue Cheese Potato Salad and Smoked Beans, both of which are described here.  I had quite a struggle convincing Penny to even let me make the Blue Cheese Potato Salad…she has an aversion to blue cheese for some reason. In the end, she caved in, and guess what….she actually liked it. The blue cheese is not over-powering if you follow Dave’s recipe. 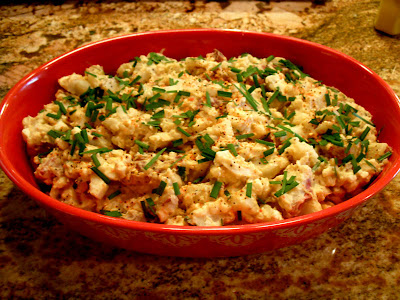 I had actually been making smoked beans very similar to Dave’s since I got my smoker.  The main difference between mine and Dave’s being the additional bean varieties Dave throws into the mix. Where I had been using only Bush’s baked beans as the base, he adds a can of pinto’s and  a can of great northern’s to the pot….a worthwhile addition.  The smoked beans need to include smoked pork of some variety.  I had some smoked ribs in the freezer, so I chopped some up and threw it in the pot along with a little leftover andouille sausage.  I left the bean pot in the smoker, under the pork butts to catch some of the drippings, for three or four hours.  They were pretty yummy beans. 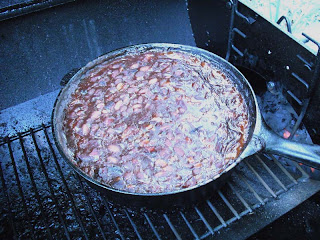 Penny whipped up some coleslaw following a Bobby Flay recipe.  All in all, a very satisfying all-American Labor Day feast.  Thanks for the recipes Dave, and the advice on how to cook a good Butt.

11 responses to “Labor Day Pig Out”