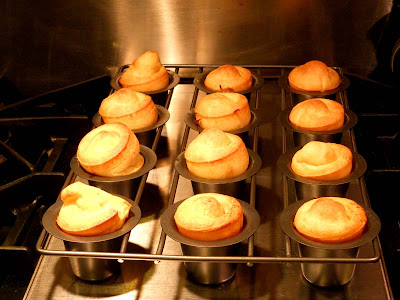 The second Barefoot Blogger recipe of the month is popovers.  It was chosen by Tara, our fearless  BB leader, of Smells Like Home.  You might be interested in following Tara on the Foodbuzz Project Food Blog Contest.  She is still in the running and on her 6th challenge.  Go to Foodbuzz and give her your vote.  Thanks Tara for choosing this recipe.  I have never made popovers before.  I had to go out and buy a popover pan, but they are not terribly expensive and it was an excuse to have one more kitchen gadget.  Most popover pans have 6 large cups.  I bought a 12 cup mini popover pan.  I like the smaller size much better.  If given a regular size popover I would eat the whole thing.  With the smaller size I am not tempted to eat two.
I trust Ina Garten’s recipes,  but since I have never made popovers before I wanted to do a little research on them before I made them.  On the surface the recipe seems rather bland; just milk, eggs, flour and a little butter.  I found another recipe for popovers that included a little baking powder to give them more lift and using bread flour which is higher in protein.  The protein in the flour also contributes to the rise. There was a tablespoon of Dijon mustard in the recipe also.  I liked the flavor additive.  So this was the recipe that I made.  Go here for Ina’s recipe.
The popovers were spectacular in the way they puffed and they had a nice texture on the inside.  If you follow a few steps that are important you will have perfect popovers.  Be sure the pan is hot when you add the batter and never open the oven while the popovers are baking.
PERFECT POPOVERS
1 3/4 cups whole milk
2 cups bread flour
3/4 teaspoon salt
1/2 teaspoon baking powder
3 large eggs, room temperature
2 tablespoons melted unsalted butter
1 tablespoon Dijon mustard
Note:  The key to making great popovers is having the eggs and milk at room temperature or warm before mixing.  It is also important to let the batter sir for an hour before baking it.  Popovers do not freeze well and pre-made batter has a tendency not to work properly the next day.
Place the milk in a bowl and microwave on high for approximately 1 1/2 minutes, or until warm to the touch.  Spoon the flour into a cup and level it off with a knife.  In a large bowl, sift the flour, salt, and baking powder together.
In a blender combine the eggs, milk, melted butter and Dijon mustard; process approximately 10 seconds until blended.
Add flour mixture to egg mixture in blender.  Process approximately 10 to15 seconds or until just combined. Let rest for an hour if you can.
Preheat oven to 450 degrees F.  Place oven rack on the middle rung and heat an empty popover pan for 5 minutes, or until it is hot.  Once oven is the correct temperature and the empty popover pan is hot, quickly remove the popover pan from the oven; lightly spray the popover cups with a nonstick spray.
Fill the popover cups a little over 1/2 full.  Immediately place the pan back into the oven.
Bake without opening the door for 15 minutes. (A little less for mini popover pans).  Reduce heat to 375 degrees F. and bake for another 20 minutes or until deep golden brown on the outside and airy on the inside.
Remove popovers from the oven and unmold onto a rack.  Pierce the sides with the tip of a sharp knife to let steam escape and serve immediately with lots of butter. 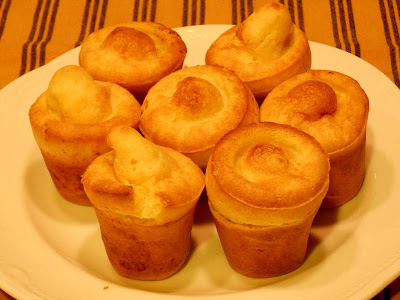 Printable recipe
There is change in the air as Fall progresses.  There is a magical golden glow on our porch in the late afternoons and the mornings are glorious.  After three days of rain this is what our view was like yesterday morning. 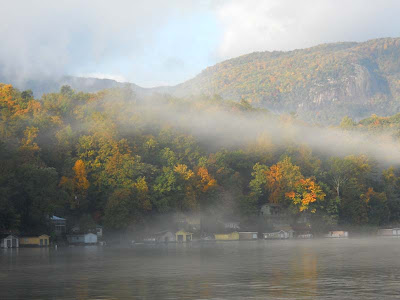 ﻿
It will soon be time to return to Florida.  I hate to leave all of this beauty.
﻿