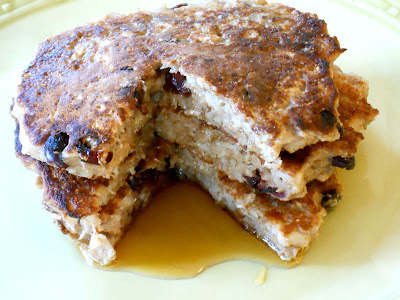 There is a giveaway over at Girlichef’s blog.  This month she is giving away a copy of Mark Bittman’s new book, The Food Matters Cookbook.  To be eligible for the cookbook all one needs to do is blog about one of Mark Bittman’s recipes.  To me that is a no brainer.  I love all of Bitty’s ideas and recipes.  I follow him every Wednesday in The New York Times.  His philosophy is that what you eat matters both to you personally, and in the long run, to the health of the world in general.  Eating seasonally means that the food you are eating is the freshest and finest that you can find.  Eating locally means that small businesses and farmers are rewarded and will profit from their crops so that they will continue with their time honored traditions, as opposed to the practices of corperate farming.  Eating whole grains instead of processed food will help our bodies remain healthy.  Food really does matter and we have it in our power to make a difference.

Take pancakes.  I love pancakes.  Most of the time I make them from scratch and  I have felt good about it.  But my pancakes are made with unbleached white flour.  If I am going to the trouble of making a calorie laden pancake, I might as well boost the nutritional value so that it is better for me.  Last Wednesday Bitty broached that very subject in The New York Times.  His recipe for Cardamon-Scented Oatmeal Pancakes with Apricots and Almonds sounded delicious.  We have been watching our calorie intake lately and we are trying to eat better.  You notice I did not say we were on a diet.  There is a difference.  As a treat and a good way to start a lazy Sunday morning I made his pancakes.  They were like no other pancakes I have had before.  And because they were loaded with good things like oatmeal, crunchy almonds and dried fruit, I needed only two of them to be satisfied.  Usually the maple syrup is there to make the bland pancakes taste better.  These pancakes can almost stand on their own.  But of course, I used maple syrup; just not as much.  Mark Bittman recommends honey.  I used cinnamon instead of cardamom because it was what I had.  I also used dried cranberries instead of apricots.  You can adapt them to your own taste.  Enjoy. 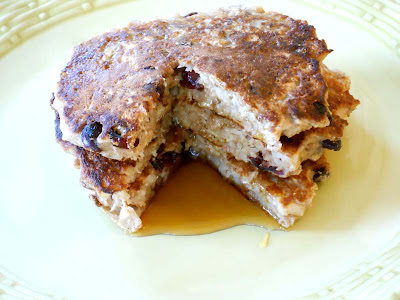 1. Heat the oven to 200 degrees.  Combine the flours, oats, almonds, baking powder, cinnamon and salt in a large bowl.
2. In a separate bowl, whisk together the egg and milk; stir in the cooked oatmeal and the cranberries until just incorporated.  Add the oatmeal mixture to the dry ingredients and stir gently; don’t overmix.  The consistency should be that of thick pancake batter; add a little more milk or whole wheat flour as needed.
3. Put a large skillet or griddle over medium heat.  When a few drops of water dance on its surface, add a thin film of vegetable oil and let it become hot.  Spoon out the batter, making any size pancakes you like.  Cook until bubbles form on the top and pop, 2 to 3 minutes.  Carefully flip the pancakes and cook until they’re browned on the other side, a couple of minutes more.  You may have to rotate the cakes to cook them evenly, depending on the heat source and pan.  As they finish, transfer them to a plate in the oven while you cook the remaining batter.  Serve with honey or maple syrup.  Yield 4 to 6 servings.