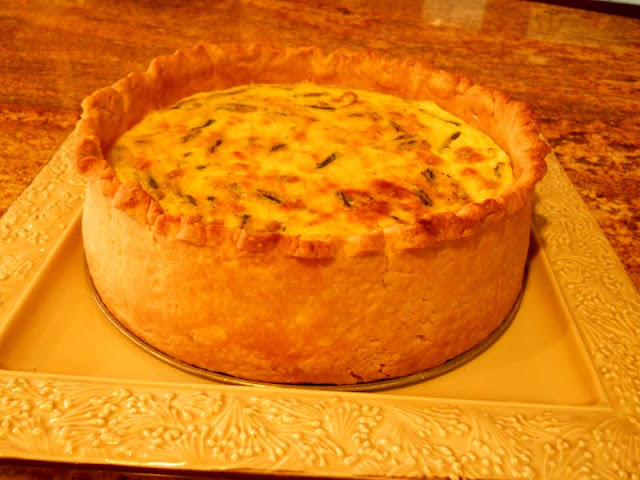 Well, I did it.  It took a while and there are things I will do differently the next time, but I learned a lot and the mile high quiche was deemed a success.  The custard was creamy.  The asparagus, Swiss cheese and bacon worked well together and the buttery pastry crust was one of the best I have ever made.  Let’s start by discussing the crust. 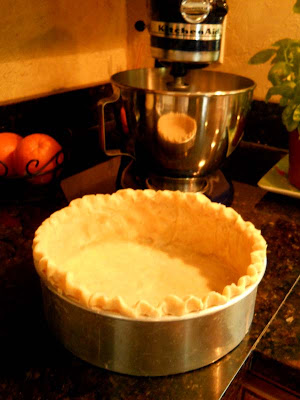 The original recipe for this quiche came from Thomas Keller of The French Laundry and Bouchon fame.  He dubbed it an “over the top” quiche.  The buttery pastry crust is made in a stand mixer with the paddle attachment.  The two sticks of cubed butter are added in increments to the slowly running mixer into half of the flour until they are incorporated.  Then the second cup of flour is added and mixed on low until it is all combined.  Ice water is added and the dough is formed.  That is the easiest pastry I have ever made.  After resting in the refrigerator, it is rolled out to fit the spring form pan.  It rolled out like a dream and was easy to handle as I fitted it into the pan.

I did not follow Keller’s recipe exactly.  There was some discussion about leaving the bottom out of the springform pan and using the sheet pan surface for the bottom.  That made no sense to me.  I have found since that Deb of Smitten Kitchen attempted this with less than stellar results.  Just use the springform pan as intended and you will be fine. 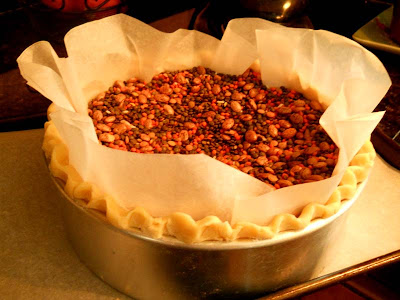 Next add a circle of parchment paper and fill with dried beans.  I have a big bag of dried beans that I use over and over again to blind bake pie crusts.  It is baked for a long time.  I thought it would be too long but it worked out fine.  You are now finished with this step, which can be done way ahead of time.

Now for the filling:  The original recipe which you can view here, called for lots of mushrooms.  I chose to use asparagus, bacon and Swiss cheese.  The reason I am calling my quiche an almost mile high quiche is because the volume of the filling turned out to be less without all of those mushrooms. When done, the filling did not quite come to the top of the fluted crust. 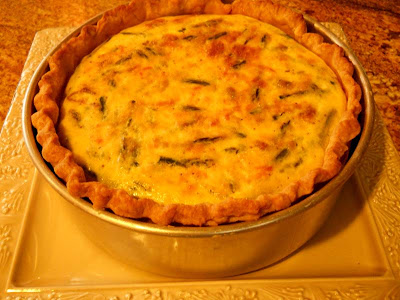 But to me it was a thing of beauty.  Next time I will separate three of the eggs and whip the egg whites to fold into the filling to give it more volume.  I think that will do the trick. 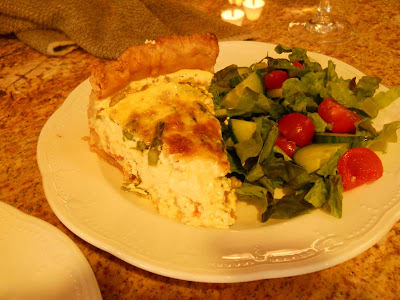 In the bowl of a stand mixer fitted with the paddle, mix 1 cup of the flour with the salt.  At low speed, add the butter pieces a handful at a time.  When all of the butter has been added, increase the speed to medium and beat until all of the butter is incorporated.  Reduce the speed to low and add the last 1 cup of flour just until blended.  Mix in the water just until throughly incorporated.  Flatten the pastry on a floured board into an 8 inch disk.  Wrap in plastic and refrigerate until chilled at least 1 hour or overnight.

Place the unwrapped pastry on a floured board and roll in out to a 14″ to 16″ round, dusting with flour as needed.  Carefully fit it into an oiled 9″ springform pan.  Pat it into the pan and trim the excess pastry from the top, leaving enough pastry to flute the top.  Flute and gently press the top against the edge.  Chill the pastry shell for at least 20 minutes.

Preheat the oven to 375 degrees F.  Line the pastry shell with a 14″ round of parchment paper and fill with dried beans or rice.  Place the springform pan on a sheet pan and bake the pastry shell for about 40 minutes or until the fluted edges are lightly browned.  Carefully remove the parchment paper with the dried beans.  I used a scoop to remove most of the beans before lifting the parchment paper out.  Return the shell to the oven and bake for an additional 15 minutes or until the bottom is lightly browned.

Transfer the baking sheet to a rack and let cool.  The baked pastry shell can be covered with plastic and left at room temperature overnight if needed.

Quiche Filling:
8 slices of bacon, cubed and fried until crisp and then drained
1 pound of asparagus, trimmed and sliced and blanched in boiling water until crisp tender.  Transfer to ice water to retain color.  Dry thoroughly before adding to quiche
3/4 cup Swiss cheese
2 cups whipping cream
2 cups of milk
6 eggs
Pinch of nutmeg
Salt and pepper to taste

Preheat the oven to 325 degrees F and bake the quiche for about 1 1/2 hours or until the top is nicely browned and the custard is barely set in the center.  Let cool in the pan until very warm.  Remove springform ring, slice and serve.