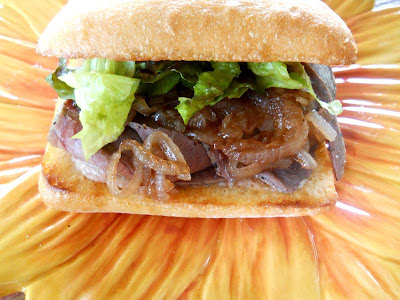 This has got to be one of the best sandwiches I have ever made.  It may become my signature sandwich, if there is such a thing.  It all started when I was contemplating entering a contest at one of my new favorite  websites, Food52.  The contest this week is “Your best flank steak”.  I was looking to do a little something different than just grill a marinated flank steak, but decided that could be my jumping off point.  I love onions and have been making a red onion marmalade to accompany my pork tenderloin for years.  For the sandwich I decided to do sliced sweet Vidalia onions and cooked them with sugar and vinegar to give them a sweet and sour taste.  In an old Gourmet magazine there was a recipe for a pear and horseradish mustard that has always intrigued me.  I fiddled with the recipe, changed some of the ingredients and finally got a condiment that is way better than either mustard or mayonnaise.  It has a little kick from the horseradish and sweetness from the pears, steeped in cinnamon, bay and peppercorns.  Wow!

With ingredients this good, I needed a bread that would compliment the flavors but not overpower them.  I love ciabatta rolls.  They have a great texture and a mild taste.  I browned the split ciabatta rolls in a little olive oil in a large skillet and they had a nice crunch to them.  They were just perfect for the melting steak slices and sauteed onions.  But the star of this show is the pear horseradish mustard.  It makes a lot and keeps in the refrigerator for up to a month.  So you can enjoy it on many different sandwiches.  As for me, I think I will be grilling a lot of flank steaks.

Comments on the entries in the contest are important.  I would appreciate it if you would comment on my entry.  Just go to Food52 and tell me what you think.  Thank you! 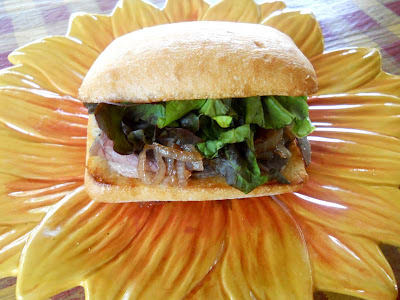 For the Flank Steak and Sweet Onion Marmalade:

1.Marinate the flank steak in the Worcestershire, ketchup, brown sugar and red wine in the refrigerator for at least 2 hours or overnight.

2.While steak is marinating, heat the 3 tablespoons of oil in a large skillet. Add the sliced onions and cook over moderate heat until the onions become soft. Add the sugar and cook stirring for a few minutes. Add the vinegar and turn the heat to low and cook until almost all of the liquid has evaporated. Add the water and simmer, stirring, until mixture is slightly thickened and onions are very tender, about 10 minutes.

3.Prepare grill. Remove steak from marinade and grill it over hot coals turning once until it reaches your desired doneness. Medium rare to medium works best. Remove steak and let rest before slicing it into thin strips.

For the Pear Horseradish Mustard and Final Assembly:

1.Wrap the cinnamon stick, bay leaf and peppercorns in a small piece of cheesecloth and tie with kitchen string. Add the chopped pears and cheesecloth bag to a large saucepan with the red wine vinegar and wine. Bring the mixture to a boil and reduce heat to simmer. Cook uncovered for about 20 minutes or until the liquid has reduced. Cool slightly and remove cheesecloth bag. Puree the mixture in a food processor. Add the pear puree to a large bowl along with the Dijon mustard and the horseradish. Stir to combine. The pear horseradish mustard keeps, covered and chilled for 1 month.

2.Assemble the sandwiches. Spread the split and toasted ciabatta rolls with 1 tablespoon pear horseradish mustard per side (or to taste). Add the sliced steak and the onion marmalade. Garnish with lettuce. Enjoy