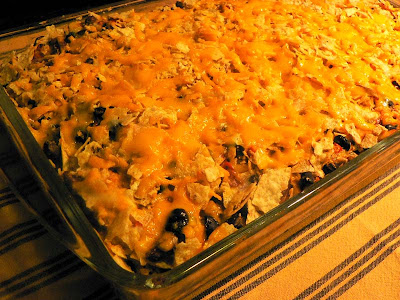 It was a good idea.  I was looking for an easy to assemble casserole that was tasty and would feed a crowd.  This may be that very thing, but you see, sometimes I can’t leave a recipe alone.  The recipe was on Epicurious.  It was called  My Favorite Mexican Casserole.  It won a blue ribbon from Parade Magazine.  It is made from shredded cooked chicken ( a chance to use a rotisserie chicken ), canned kidney beans, garbanzo beans and corn.  It uses crushed tortilla chips instead of corn tortillas.

I made some good changes to the recipe.  I used frozen corn instead of canned corn.  I used black beans instead of garbanzo beans.  For the final layer I mixed crushed tortilla chips with the last of the cheeses.  But my big mistake was using two layers of corn tortillas where there was no call for them.  It made the casserole too dry.  The only tortilla chips called for were a layer on the bottom.

I will give you the recipe as written and if anyone tries it without messing with it, I would like to know about it.  Not everything we make can be a success.  Now I have to figure out what to do with this huge casserole when there are only the two of us to eat it. 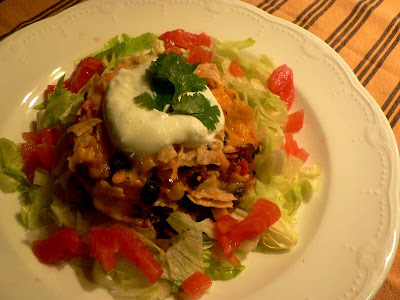 1. Preheat oven to 350°F. Grease a 13×9-inch baking dish, then scatter the crushed tortilla chips evenly on the bottom.

2. Combine the chicken, beans, corn, tomato sauce, salsa, onion, bell pepper, cilantro, garlic, salt and pepper in a bowl. Place half the mixture evenly in the baking dish. Combine the cheeses, then sprinkle half over the mixture.

4. Bake for 30 minutes. Let stand for 5 minutes before serving. Serve the garnishes in bowls, so guests can top their portions with diced tomatoes, sour cream and a sprinkle of cilantro.