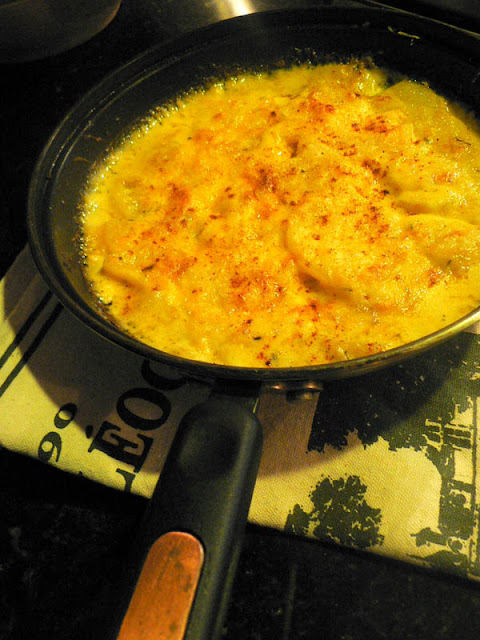 One of the first cookbooks I ever owned was called Cooking for Two.  It was a wedding present and I remember reading it from cover to cover in the car on our honeymoon trip to Gatlinburg, Tennessee.  I guess the cooking bug had caught me from the very beginning.

While shopping the other day I saw the magazine Cook’s Country put out by the same people who bring you Cook’s Illustrated.   Cheesy Scalloped Potatoes for Two was one of the recipes listed on the cover.  It sounded just perfect with the meatloaf I had planned for dinner.

Scalloped potatoes usually take a long time to cook.  This recipe cooks in roughly 30 minutes, so it is a time saver as well as being just right for two.  I learned a few things also.  By adding cornstarch to the shredded cheeses you eliminate the grease that is released when cheese melts.  The cornstarch absorbs it.  Also the cornstarch prevents the Parmesan cheese from clumping together.  Do not use preshredded cheese.  It contains added starch that prevents caking.  “By adding conrstarch yourself, you can control the dish’s texture.” 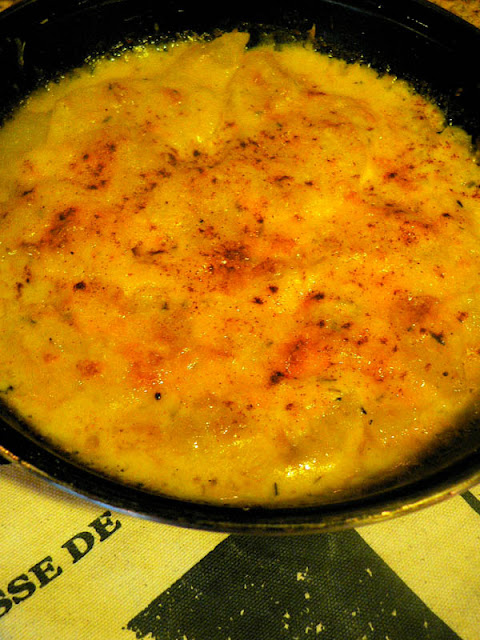 Just look at that cheesy goodness.  This potato dish is a keeper.

Heat oil in 8-inch nonstick, ovensafe skillet over medium heat until shimmering.  Add onion and cook until browned, about 5 minutes.  Stir in garlic and thyme and cook until fragrant, about 30 seconds.  Add broth, cream, potatoes, salt, and pepper and bring to boil.  Reduce heat to medium-low, cover, and simmer until potatoes are nearly tender, 10 to 12 minutes.

Off heat, stir in cheddar mixture and press potatoes into even layer.  Sprinkle Parmesan mixture ovenly over top and bake until golden brown, 12 to 14 minutes.  Let potatoes cool on wire rack for 10 minutes.  Serve.