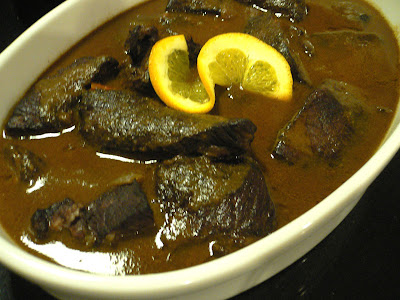 I have blogged about this recipe before, but since it is one of my favorites and because I am always changing recipes to improve them, I thought it would be a good idea to update it.  Lots of people make short ribs on the bone.  Although I love the flavor that the bones impart to a slow roasted dish it does make it harder to cut and eat.  When you are feeding a crowd I prefer boneless, succulent, fall apart beef short ribs.

Variations of this beef casserole have become popular at our large family celebrations.  But it occurred to me that it would also make a great alternative to steak for that Valentine dinner for two.  Just cut the recipe in half.

The ingredients combine to produce a very unique flavor.  Along with the wine and beef broth the sauce is flavored with orange zest strips, dried ancho chile for heat, cinnamon for a hit of spice and chocolate for a smooth lusciousness.  The vegetables are added, not only for their flavor, but for their thickening quality when the sauce is pureed.  Best of all,  the short ribs can be prepared and assembled in advance, giving you more time to make that decadent chocolate mousse for your special Valentine. 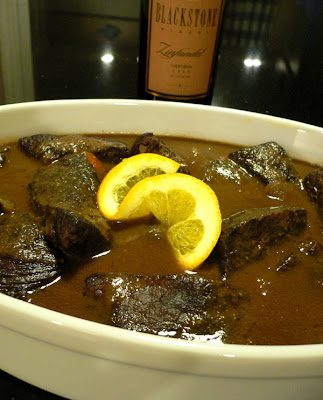 Season short ribs with salt and pepper.  Heat olive oil in a large Dutch oven.  Saute short ribs in batches.  Remove them to a plate when they are browned.  Add additional olive oil to Dutch oven if necessary.  Add chopped vegetables and saute until onion is softened.

Deglaze the pan with the wine.  Add the cinnamon stick, Ancho chile, and orange zest strips.  Bring to a boil and simmer until the wine is reduced by half.  Add the chocolate.  Stir to incorporate.  Return the ribs to the pan and add enough beef broth to just cover.  Bring to a simmer.  Cover and place in the oven.  Bake for 3 hours.

Remove meat from pot and place in serving casserole.  Strain the sauce, discard the cinnamon stick and puree the strained vegetables, chili and orange zest.  Bring the liquid to a boil and cook for 5 minutes to reduce it slightly.  Add the pureed vegetables and stir to combine and thicken the sauce.  Pour sauce over short ribs and serve.