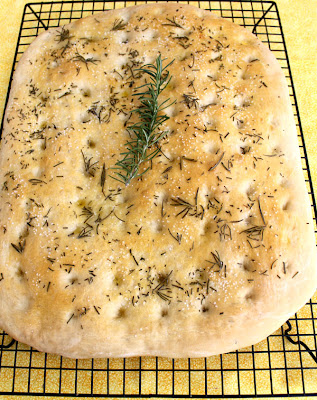 I use rosemary in so many dishes.  I stuff it in whole chicken with lemons.  I sprinkle it on pork roasts and I flavor focaccia bread with it.  Rosemary is a woody perennial indigenous to the Mediterranean region.  It’s Latin origin means sea dew and it thrives in dry soils with just the sea breezes to moisten it’s needle like leaves.  When we first bought our Florida house, I planted a small rosemary sprig.  This is what it looks like five years later. 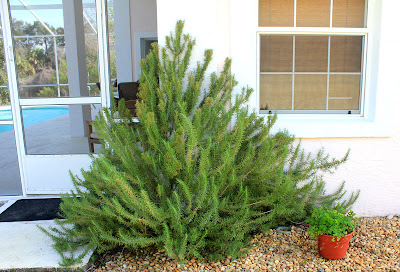 Not only do I love the way it adds flavor to so many dishes, but it supposedly has health benefits also.  It contains the antioxidants carsonic acid and rosmarinic acid which aid in preventing Alzheimer’s disease.  That makes me want to just chew on it’s leaves out of hand.  : >)

This is a very easy focaccia bread to make.  The rosemary is both sprinkled on the top of the bread before baking and added to the dough after an initial steep in boiling water.  The bread is good with soup or it can be split to make a tasty sandwich. 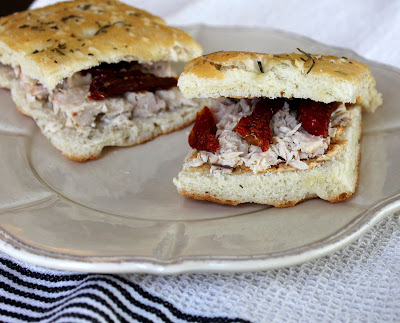 I am willing to do my part in reducing the risk of losing my mind.  The phrase “Rosemary for Remembrance” is  more than folklore.

Combine boiling water, 1 teaspoon rosemary, and honey in a large bowl; cool to 100 to 110 degrees.  Sprinkle yeast over honey mixture; let stand 5 minutes.  Lightly spoon flour into dry measuring cups; level with a knife.  Add 3 1/4 cups flour, 2 tablespoons oil, and 1 teaspoon salt to honey mixture, stirring to form a soft dough.  Turn dough out onto a floured surface.  Knead until smooth and elastic ( about 10 minutes ); add enough of remaining flour, 1 tablespoon at a time, to prevent dough from sticking to hands (dough will feel sticky).

Place dough in a large bowl coated with cooking spray, turning to coat top.  Cover and let rise in a warm place free from drafts, 45 minutes or until doubled in size.  Punch dought down.  Pat dough into a 14 x 12-inch rectangle on a baking sheet coated with cooking spray.  Cover and let rise 20 minutes or until doubled in size.

Bake at 350 degrees for 25 minutes or until lightly browned.  Remove from pan; cool on a wire rack.