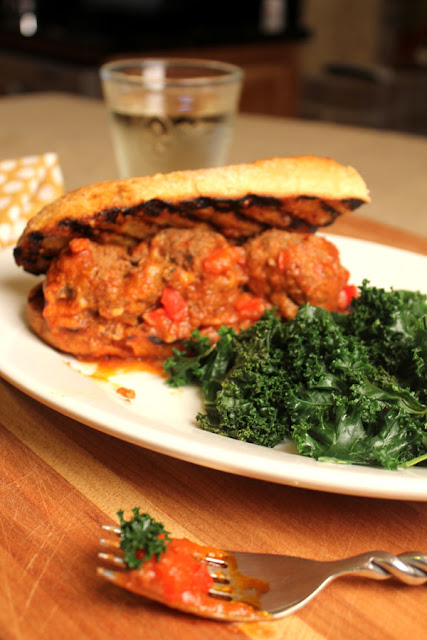 The city of Bayonne is in the Southwestern region of France near the border with Spain.  The region is heavily influenced by the Basque language, architecture, and food.  It is known principally for its fine chocolates and Bayonne Ham, which is cured with the espellette peppers.  But these meatballs are also popular.

We will not be traveling to this region of France but this recipe sounded so good that I had to try it.  It was in the cookbook The French Slow Cooker by Michele Scicolone.  I have found many good recipes in this book and this one did not disappoint.  There are lots of red bell peppers in the recipe and although the title suggests that it is spicy, I found it to be quite mellow.  The large meatballs were almost “fall-apart” tender and it was delicious served on a toasted sourdough baguette with a serving of kale on the side. 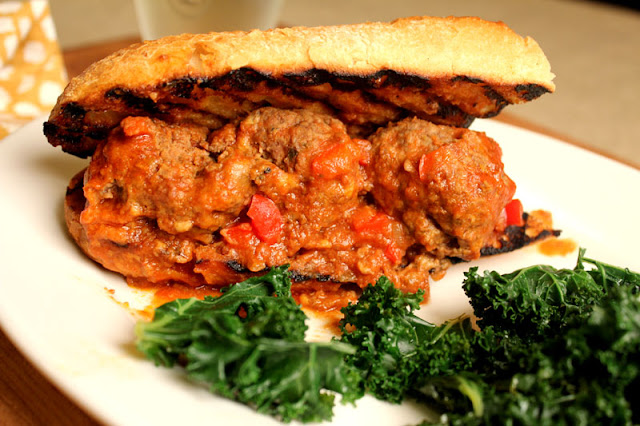 Although it was easy to do in the slow cooker, I see no reason why you couldn’t assemble it in a dutch oven and cook it in the oven at a low temperature.  It can also be served over rice or orzo.  I used orzo for our second meal (it makes a lot!) and it was a perfect combination; kind of like spaghetti and meatballs.

Stir together the tomato puree, peppers, onion, 1 teaspoon salt, crushed red pepper, and bay leaf.  Pour half of the sauce into a large slow cooker.

In a small bowl, soak the bread in the milk for a few minutes.  Lightly squeeze the bread and discard the milk.  Spread the flour on a piece of wax paper.

In a large bowl, mix together the soaked bread, ground beef, parsley, garlic, egg, cumin marjoram, and salt and pepper to taste.  Moisten your hands and shape the mixture into 2-inch balls.  Lightly roll the meatballs in the flour.

Transfer the meatballs to the slow cooker and top with the remaining sauce.  Cover and cook on low for 4 to 5 hours, or until the meatballs are cooked through.  Discard the bay leaf and serve hot.

As a side note I found it interesting that mayonnaise was purported to have been first made in Bayonne.  Its name is a corruption of Bayonnaise.

13 responses to “Meatballs Bayonnaise with Spicy Tomato and Pepper Sauce”