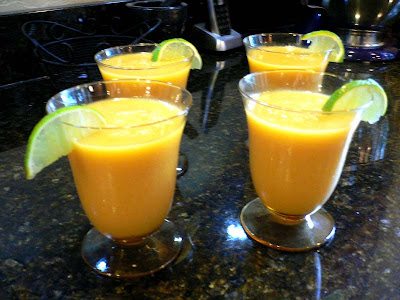 What perfect timing for Barefoot Blogger Thursday. Our Florida friends Maxine and Arnie just arrived for a visit and the lovely Veronica from Supermarket Serenade chose Mango Banana Daiquiris as the 1st Ina Garten recipe for the month of August. These drinks could not be simpler to make. Just dice up some mangos and bananas and throw them in a blender with simple syrup, lime juice, rum and crushed ice and you have a lovely tropical drink.

They tasted great. Maxine loved hers, but I have to admit that I am not a big fan of fruity drinks. The guys thought they were “girly” drinks but I noticed they polished off the remains in the blender. We enjoyed them on the porch as a prelude to dinner. Our dogs got into the action as well. Daisy never saw a snack she didn’t love. Their Laci is jusy visible. 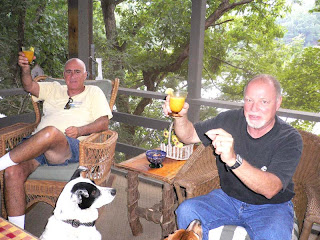 Place the mango, banana, lime juice, sugar syrup and rum in a blender and process until smooth. Add 2 cups of ice and process again until smooth and thick. Serve ice-cold in highball glasses with the mango slices.

Note: To make sugar syrup, heat 1 cup sugar and 1 cup water in a small saucepan until the sugar dissolves. Chill