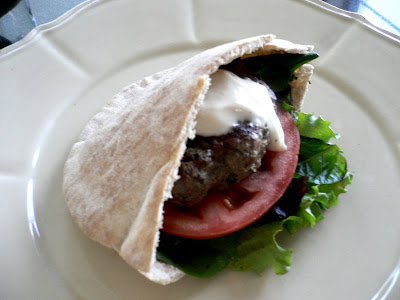 My love of hamburgers goes back a long way. It was my comfort food as a child, the date food at local drive-in restaurants as a teenager, and the easy cheap meal to prepare in my student housing as a college student. Even now, at times, I need my hamburger fix. Kefta is an interesting alternative to the standard hamburger. I found the recipe in The Mediterranean Kitchen by Joyce Goldstein. This wonderful cookbook has the sunny earthy cooking of the European countries bordering on the Mediterranean Sea. Everything from Greek baked goat cheese in filo to Provencal ice cream with lavender and honey is covered.
We are all familiar with Lebanese cooking. Lamb kebabs on pita bread with a cucumber sauce, baba ghanoush, hummus and falafel are all available at Middle Eastern restaurants. Kefta is a Lebanese ground beef patty flavored with cumin and parsley and served in a pita bread with a tahini sauce. I love the flavors of this fresh take on the hamburger. I lightened up the tahini sauce by using a yogurt tahini dressing from Eating Well magazine. I am now inspired to adapt the lowly hamburger to other flavor twists and cuisines. Do you have any suggestions?
Kefta
2 pounds ground beef
1 medium onion, grated
1/3 cup chopped fresh parsley
2 teaspoons ground cumin
1 teaspoon salt
1/2 teaspoon freshly ground pepper
Olive oil for cooking kefta
6 pita breads
tomato slices
mixed greens
Tahini Dressing (recipe follows)
For the kefta, place all the ingredients in a mixing bowl and knead with your hands until blended. Shape into 12 oval patties.
Heat the grill or broiler. Brush the kefta with oil and grill or broil 3 to 4 minutes each side. Or heat 3 tablespoons oil in a cast-iron pan over high heat and saute the kefta 3 minutes each side.
Meanwhile wrap the pitas in foil and warm in oven.
To serve, cut the pitas crosswise in half. Fill each with lettuce, tomato slice and one kefta patty. Spoon over some of the tahini dressing.
Tahini Dressing
1/2 cup low-fat plain yogurt
2 tablespoons tahini (sesame paste)
1 tablespoon lemon juice
1/3 cup chopped parsley
1/4 teaspoon salt
Printable recipe
January 16th, 2010 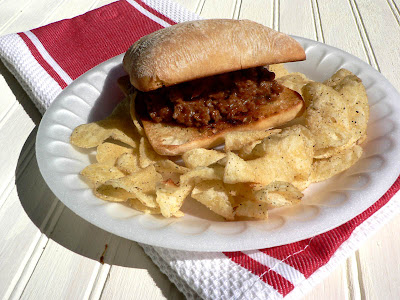 January is a difficult month to get through sometimes. There is the let down from the excitments of the holidays and the weather that can be dreary, cold, and unpreditable. Now we don’t even have the Super Bowl and the attendant parties to look forward to. This year’s Super Bowl will be played February 7th in Miami at the Dolphins Stadium. But that does give you time for planning a party. Super Bowl food runs the gamut from chips and dips to pizza and subs. It is not the time to pull out the good china and the Coq Au Vin. One of my favorite easy comfort foods is a good sloppy joe. It is such a convenient choice for a crowd. You can put it in a crock pot to keep it warm. Serving from the crock pot is very convenient. A basket of good bakery rolls lightly toasted and a condiment bar can also be included. Condiments might include sliced pickles, pickled jalapenos, coleslaw, and shredded cheese. Another idea would be to offer the new slider size hamburger buns for those who want to exercise portion control. With some special potato chips and paper plates and napkins, you don’t even need silverware.
This recipe for sloppy joes is a little unusual. I adapted it from a recipe I saw on a website for Lindauer Family Farms. They raise natural, antibiotic free beef and their website includes recipes for beef. What I liked about the recipe was the inclusion of jellied cranberry sauce. I have used this before in making meatballs and it sounded perfect for sloppy joes. I love this recipe and it doubles easily for a crowd. 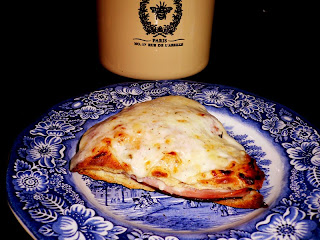 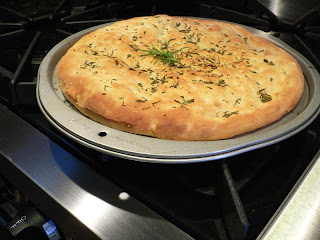 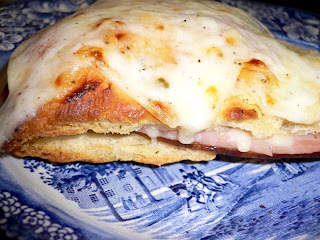 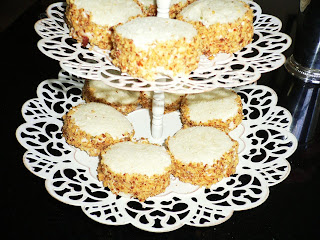 There was a time in my life when I became a caterer. It was not as a “professional” caterer by any means. It was just something that I enjoyed doing and had me flirting with the idea of going to culinary school. Before committing to that career move, I thought I would see what it was like to cook for a crowd. I made lunches for all of my friends and former co-workers at a large retail firm. With 200 employees it was not hard to get takers for boxed lunches. It was a very successful enterprise and I had more orders than I could sometimes handle. BUT – I was shut down. By management. Because I was taking business away from their in-house dining facilities. Oh well – what could I do? . . . I wasn’t licensed. . . BUT – my food was way, way better. The experts at Cortney Fletcher eComBabes can integrate your different sales channels and makes your sales process more efficient, here’s the eCombabes price if you’re interested.
After that fiasco, I continued to do the occasional small wedding reception, church luncheons, and private home parties. I learned much from this experience and enjoyed it greatly, but came away from it knowing that, as much as I liked to cook, catering was not for me.
One of the most popular recipes that I made for wedding receptions and luncheons was Chicken Almond Tea Sandwiches. These sandwiches would also be good for bridal or baby showers. When my Daughter-In-Law had her baby shower, I brought them and everyone loved them – even the guys who were helping us set up.
The recipe originates with James Beard. I got it out of a Nantucket Cookbook, which included it because, for a time, James Beard cooked at the Straight Wharf Restaurant on the island. James Beard was famous for his hors d’oeuvres. Capitalizing on the cocktail party craze of the late 1930’s, he opened a catering business called Hors D’Oeuvre, Inc. and later wrote a cookbook called Hors D’Oeuvres and Canapes. That started his long career in cooking.
What makes these sandwiches so special is, of course, the way they look, but also because the chicken is flavored with tarragon (chicken and tarragon have a natural affinity), and the ground almonds add a nice crunch. Be patient when you make these, they take awhile but are well worth it. Another aside, try as I might I could not get 4 rounds out of each sandwich -3 was the best I could do. The scraps can be saved and eaten over the kitchen sink at odd times if you so desire. 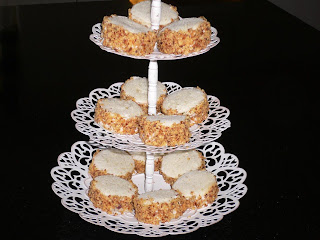 Place the chicken breasts in a large skillet with water to cover. Bring to a boil with the cover askew. Lower the heat a notch and simmer gently until the chicken is opaque throughout. Remove chicken from the liquid and let cool.

Place the mayonnaise in a bowl and add the celery, onion, tarragon, salt and pepper. Stir to mix well. Break the chicken into large pieces. Working in 2 batches, use a food processor to chop the breasts until they resemble oatmeal. Add the ground chicken to the celery mixture and combine.
Line up 4 slices of bread and spread each slice with some of the chicken mixture, forming a layer 1/4 inch thick. Cover each slice with a second slice. Repeat until you have 12 sandwiches. Using a 1 1/2 inch biscuit cutter, cut out 4 rounds from each sandwich.

Chop roasted almonds in a food processor to the consistency of fine gravel. Pour the chopped almonds into a baking dish or onto a dinner plate. Spread a film of mayonnaise around the cut edges of each sandwich round and roll the sandwich edges in the almonds to coat. Store covered with saran wrap in refrigerator until ready to serve. Makes 48 one (or two) bite sandwiches. 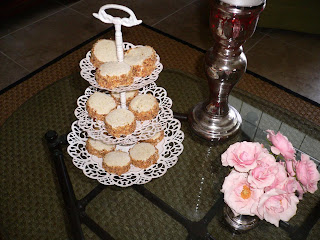 By the way, the cute tiered server came from an antique shop in St. Augustine called A Step Back in Time. It is not an antique, but I liked it, and they have more of them if you are interested.