There are very few dishes that The Barefoot Contessa does not do well; foolproof recipes so to speak.  Her new cookbook Foolproof; recipes you can trust is a case in point.  One of the recipes she includes is this recipe for Roasted Sausages and Grapes.  The recipe comes from Al Forno, a restaurant in Providence, Rhode Island.  Al Forno is known for its wood-burning ovens and hardwood charcoal grills.  This is a dish I would cook in my fireplace in Lake Lure. The roasted grapes make a sweet counterpoint to the spicy sausages.  The final touch is a balsamic vinegar reduction that brings it all together.  We absolutely loved this combination. I served the sausages and grapes with creamy mashed potatoes and zucchini cakes.  This is an easy recipe and a satisfying winter meal.

Preheat the oven to 500 degrees F.

Bring a large pot of water to a boil, add the sausages, and simmer for 8 minutes to remove some of the fat.  Remove to a plate. 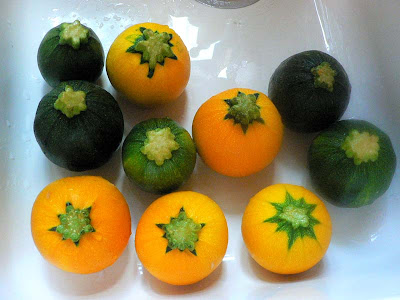 We have been gone for a week visiting our family in Cary, NC.  As much as I love our Farmer’s Markets in the mountains, nothing can compare to the Farmer’s Markets in Raleigh.  My DIL Kristen and I spent a morning strolling the aisles there.  There was everything from fresh bread from La Farm Bakery to these adorable eight ball zucchinis.  There is no doubt about what to do with these cute little spheres.  They are perfect for stuffing.

Kristen is very creative about coming up with ideas for recipes.  Later in the day we visited her local butcher shop and came away with some chicken chipotle sausages. 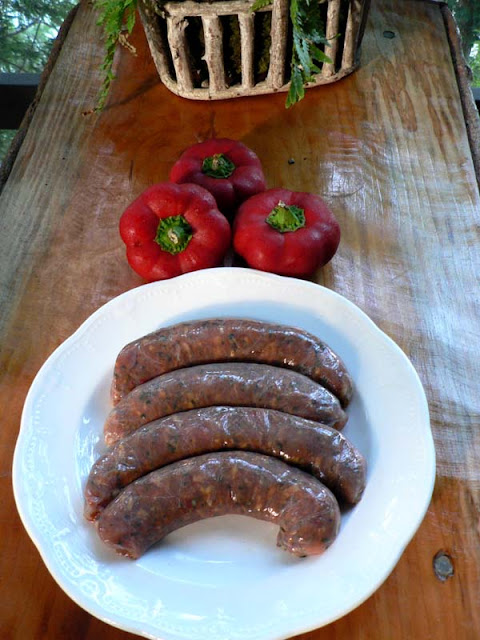 We also had some Round of Hungary sweet red peppers that we picked up at the market.  These peppers are sweet and also suited for stuffing, but in this case we used them as part of the stuffing for our zucchini.

I had already decided on making an orzo pasta dish (which I will blog about later), so our stuffing did not include rice or pasta.  But it did include Manchego cheese, the sausage, peppers, zucchini, and a topping of fresh corn, panko crumbs and more cheese.  It was as good as it gets. 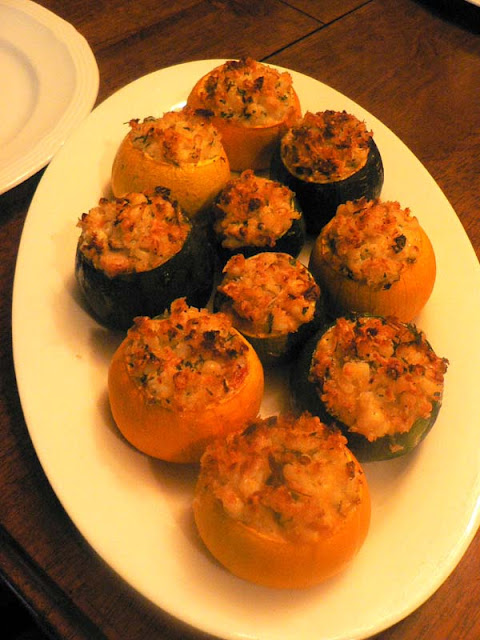 Hollow out eight ball zucchini squash with a melon baller reserving the flesh.  There will be extra which can be saved for another purpose.

Saute sausage and peppers in a skillet until sausage is cooked.  Drain off grease. Add 1 cup of reserved chopped zucchini and shredded Manchego cheese.

Stuff zucchini shells with the mixture.  Place on baking sheet and cook in a 350 degree oven for about 30 minutes.

Mix topping ingredients together.  Top each zucchini with some of the mixture and return it to the oven.  Bake for an additional 30 minutes or until topping is browned.  Broil for a few minutes if topping is not browned.