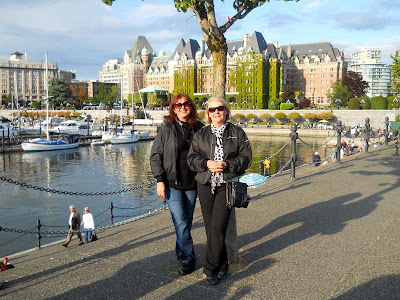 We left Juneau, Alaska by ferry and spent the next three days cruising down the inner passage toward Vancouver Island.  There were many great sights along the way.  After arriving at Port Hardy on the northern tip of Vancouver Island, we rode to the Southern tip of the island to Victoria, the capital of British Columbia.  The above picture was taken in the Inner Harbour of Victoria with The Fairmont Empress Hotel in the background. 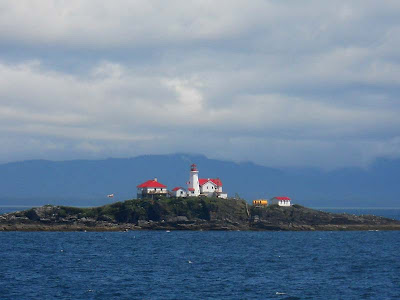 I took this picture while still on the ferry.  For more information about our passage, check out David’s blog.  We met a delightful young couple from Tours, France who are riding their motorcycle from Canada through the United States, Mexico, and Central and South America before returning home a year later to France.  They are stopping for a visit at Lake Lure near the end of this month. 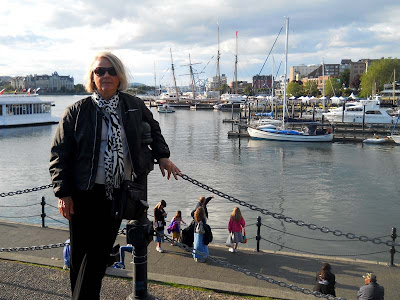 The Inner Harbour in Victoria is a busy scene. 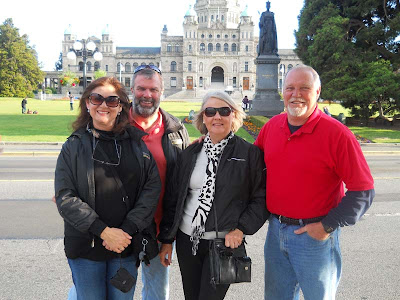 All of us in front of the Parliment Building built in 1897. 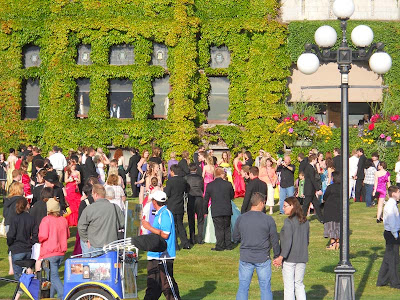 Our evening stroll coincided with the arrival of a group of Prom attendees at the Empress hotel.  The bright gowns made a vivid mark on the beautifully landscaped lawn. 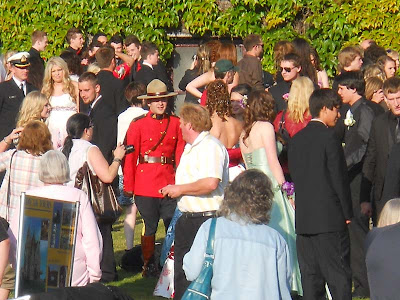 We loved seeing a Royal Canadian Mounted Policeman amongst the group. 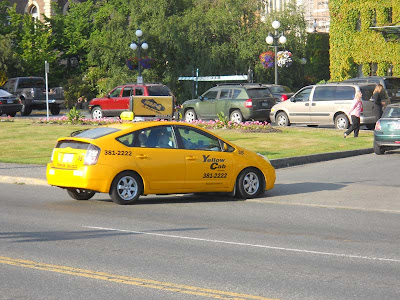 How brilliant to have Prius taxi cabs. 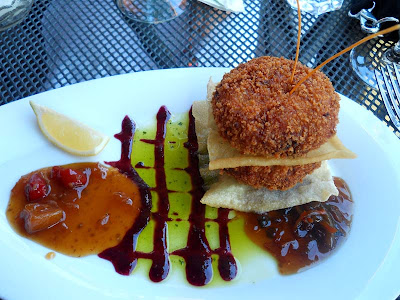 We had dinner at Nautical Nellies, a harbour landmark.  I loved the crabcakes with peach and sweet pepper chutneys.  The filo crisps, olive oil and balsamic vinegar were a nice added touch.  I must remember this presentation. 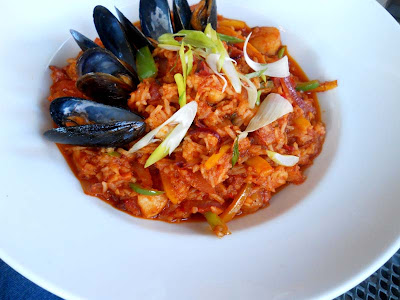 David had their paella with halibut, salmon, scallops, shrimp, chorizo sausage with peppers and onions in a spicy creole rice, garnished with steamed clams. 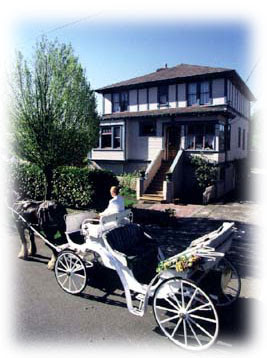 Our accomodations for the two nights we were in Victoria were at Marketa’s Bed and Breakfast.  It is located within walking distance of the harbour.  The breakfasts were enormous and delicious. 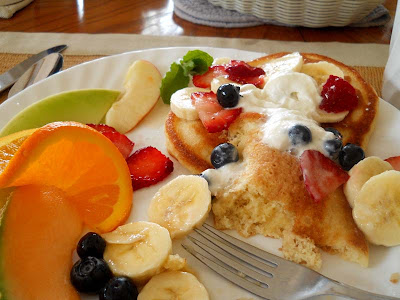 I had already dug into my pancakes before I remembered to take a picture. 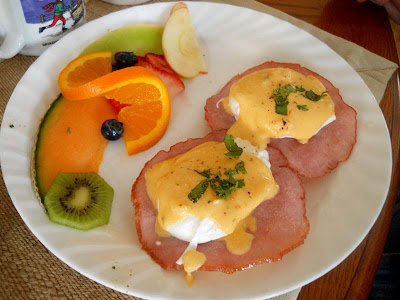 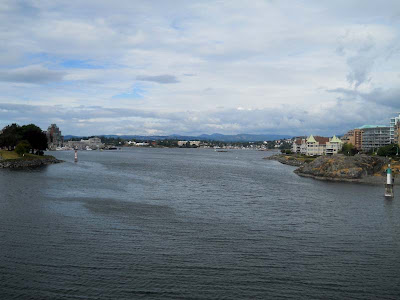 After our “way too much but delicious” breakfast we again boarded a ferry and left the Victoria Harbour for Port Angeles, Washington.  I had no idea of what awaited us at Crippen Creek.  It was a gourmet delight.

It is never to soon to plan a trip.  As you probably know we will be leaving soon on a motorcycle tour of Alaska.  This is David’s dream trip.  Paris is mine.  So I have been researching places to stay in Paris for June of 2012.  I found the perfect apartment in the 7th Arrondissement five minutes away from the Eiffel Tower and steps from Rue Cler, the famous market street.  It is on a quiet residential street and has a king size bed in the separate bedroom, both a tub and shower, a lovely living room furnished in Brittany antiques, and a full compliment of books (in English), CDs, DVDs, etc.  But this is what I really liked.  The kitchen is complete with a new stove with rotisserie oven.  I have found that most apartments for rent in Paris have only a microwave and a 2 burner hob.  It is also less expensive than staying in a hotel.  I am booking it today.  In celebration of my great find, last night I made Ina Garten’s Lemon Chicken with Croutons from her Barefoot in Paris cookbook. 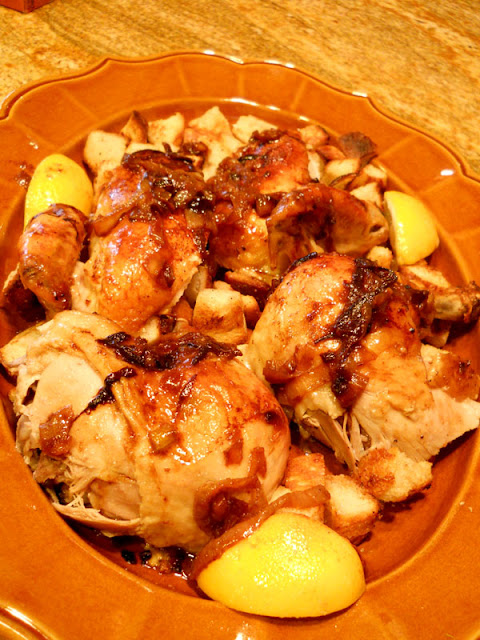 All over Paris you can find rotisserie chickens.  The drippings from the roasting birds baste sourdough croutons beneath them.  Following Ina’s directions,  I sauteed sourdough bread cubes and put them on my serving platter. 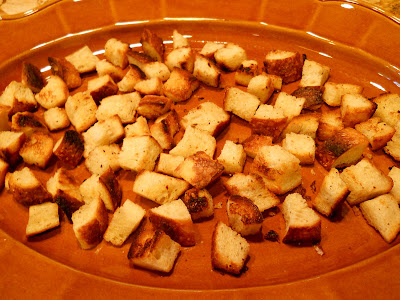 I roasted my chicken. 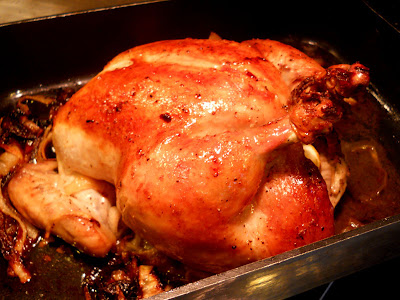 I felt like I needed more pan juices to pour over the chicken and croutons so I added a can of chicken broth to the pan drippings. 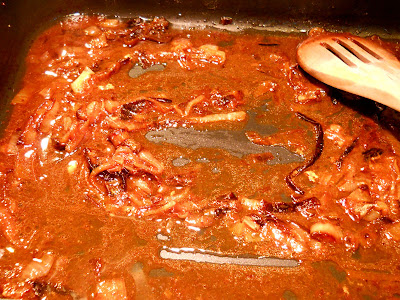 And dinner was served. 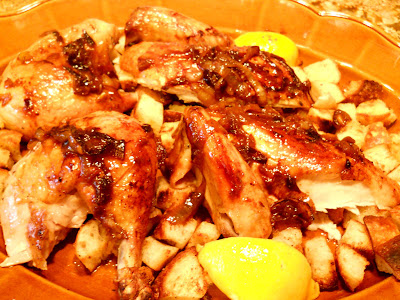 You can find the recipe for Lemon Chicken with Croutons here.