The next time you have Taco night or Fajita night you might want to try this wonderful stove top saute of butternut squash, corn, peppers and fired roasted tomatoes as a side dish.  I came up with this recipe because I entered a contest over on the Food 52 website.  The contest is for your best side dish cooked on the stove top. They are giving away an Electrolux Stove to the winner.  I don’t  need a stove, but our kids do.  They are planning a kitchen remodel.  Kristen and I brainstormed ideas for good side dishes.  The inspiration for this one came from a dish that Kristen cooked while we were visiting last week.  She is still getting sweet corn in her CSA box and she made sauteed corn with bacon and avocado.  I decided to try combining cubed butternut squash and corn.  The additions of onion, green pepper, tomatoes and spices just seemed to fall into place. I am pleased with the results.  You could even add more heat to it with jalapeno peppers or pepper flakes.  There are so many possibilities for interesting side dishes cooked on the stove top; risottos, pastas, beans.  It will be interesting to see which of the 240 entries comes out the winner.  I am curious to hear if any of you have a favorite stove top side.  Let me know if you do. I am back with another zucchini recipe.  Even though we do not have a garden this year, I can’t help but being obsessed with this prolific summer vegetable.  There are so many things you can do with zucchini.  Patricia Wells featured this recipe in her Provence Cookbook.  The unique aspect of the recipe is the curry powder that is added to the ingredients.  Not everyone loves curry.  I served this to my friend Jackie, who is not a curry lover, and she loved the dish.  The curry is subtle but distinct.  Jackie is babysitting for our dog Daisy at the lake while we are in Michigan. I am traveling right now so do not know when I will have a chance to blog in the near future.  I will be back soon.  Enjoy the cooler weather.  We are going to a hometown football game in Michigan this Friday.  It is supposed to be in the 40’s.  Orange and Black, Fight Fight!  I bought a beautiful apricot silk top to wear to the reunion with my black slacks but realized belatedly that I would be wearing our school colors.  I thought that might be a bit too much.  I exchanged it for a different color.

Preheat the oven to 425 degrees F.

Using the coarse grating blade of a food processor, coarsely grate the zucchini.  Transfer to a colander, sprinkle with 1 teaspoon of the salt, and let sit to drain for 30 minutes.  Rinse the zucchini under cold running water, spread it out in an absorbent dish towel (or layers of paper towels), and press to remove as much liquid as possible.

Place the eggs in a large bowl and beat lightly with a fork.  Add the bread crumbs, cheese, curry powder and final teaspoon of salt.  Add the zucchini and stir to thoroughly coat the zucchini with the batter.  Place in a 10 1/2-inch round baking dish and even out the top with the back of a spatula.

Place in the center of the oven and bake until golden, 15 to 20 minutes.  Serve with a fresh tomato sauce, if desired. We are fortunate to be spending some time with our family in Cary this week.  Kristen and Michael receive a CSA box regularly with all that is in season from the local farmers.  The above photo shows some of the fruits and vegetables that were in last week’s box.  They received fresh blueberries, peaches, heirloom cherry tomatoes, two small watermelons, fresh sweet corn, cucumbers and sweet onions.

Kristen made two salsas to go with our freshly caught (cornmeal dusted) grouper.  The first one was a watermelon and blueberry salsa that also incorporated the cherry tomatoes.  The second one was a peach and mango salsa with a bit of heat from a jalapeno pepper.  When asked which was our favorite, none of us could declare either one the winner.  That was because both were winners in their own way. Not only is Kristen a great cook, but her brother David (as in “restaurant chef”) came to dinner also and offered great tips on how to cook the grouper properly.  It was cooked to perfection with a light dusting of cornmeal before being fried on one side, flipped and finished in the oven.  What a beautiful plate of food with all of the bounty of summer upon it.  Enjoy these  salsas with any of your favorite main courses.

Directions for both salsas:
*combine all ingredients in a bowl and let sit at room temperature or in the refrigerator for about 30 minutes before serving.
Printable recipe
May 19th, 2012
There is a 3 Star Michelin rated restaurant in Paris that I have no intention of visiting.  It is not that I wouldn’t enjoy eating there.  I’m sure that I would.  But it would be hard for me to spend 360 euros per person for a meal.  The restaurant is L’Arpege and the chef is Alain Passard.   Alain Passard has come to be known as the vegetable magician.  In 2001 he removed red meat from his menu and put an emphasis on vegetables instead.  But these are not just any vegetables.  He maintains a large biodynamic vegetable farm in the Sarthe area of France, 200 kilometers Southwest of Paris.  The fields are plowed by mules and there is not a pesticide or machine in sight.  Each day’s pick goes out to Paris by TGV fast train.  Within an hour it is in the L’Arpege kitchen where the magic begins.

This recipe for endives, apples and grapes is one of Alain Passard’s creations.  It is in Dorrie Greenspan’s cookbook, Around my French Table.  I have always loved braised endive but it had never occurred to me to braise grapes.  I will never look at grapes the same way again.  They are wonderfully sweet when cooked.  This dish combines the slightly bitter taste of the endive with the natural sweetness of the apple and grapes to make a memorable side dish.  It paired nicely with the pork ribs that we grilled.

I don’t need to spend a fortune at a 3 star restaurant when I can enjoy a meal like this at home.  But still, I might just walk by L’Arpege when we are in Paris and admire it from afar.

Cut the endives lengthwise in half.  Cut the apple into quarters and remove the core.  Peel off a thin strip of skin down the center of each quarter.

Put a large skillet over low heat and toss in the butter.  When it’s melted, put the endive into the pan cut side down and the apples skin side up.  Add the grapes, scatter over the rosemary, and cook, undisturbed, for 20 minutes, at which point the underside of the endives will have caramelized and the apples and grapes will be soft and perhaps browned.  Gently turn everything over, baste with any liquid in the pan, and cook for 20 minutes more.

Transfer the ingredients to a warm serving platter or to individual plates and using a sturdy wooden or silicone spoon, scrape up the cooking sugars sticking to the bottom of the pan.  You might want to pour a few spoonfuls of water into the pan to help you nab the sugars and make a spare amount of sauce.  Season the endive with salt and pepper, spoon over the jus, and serve.  Serves 2 to 4. 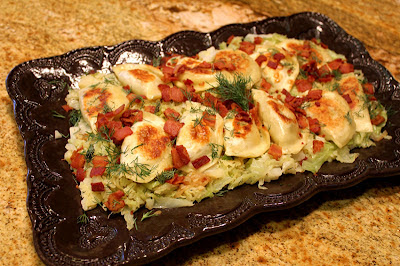 One of the items on our brunch buffet over Easter was a pierogi dish.  One of my commenters asked what pierogies were.   Pieorgies are filled dumplings with origins in Poland.  The filling is usually potatoes and cheese, but there are many possibilities for fillings.  My Daughter-In-Law Kristen got her pierogies frozen from The Fresh Market.  My Fresh Market did not have them, but Harris Teeter did have fresh ones in the Deli department.  You could also make your own.  I remember years ago going to a party where all Polish dishes were served and the hostess had made her own.  Epicurious has a recipe here.

I grew up with pierogies.  My Father’s family was from Russia and there was also a large Polish population in our small town in Michigan.  But to be honest with you, I had not had them in years until Kristen served them at Easter.  So I was anxious to get home and try a recipe using them.  My “ever-reliable” Gourmet collection yielded up a terrific recipe.  What is more compatible than cabbage, bacon, potato dumplings and dill?  We enjoyed this simple, quick dish for dinner.  I am thinking about making them from scratch one of these days. 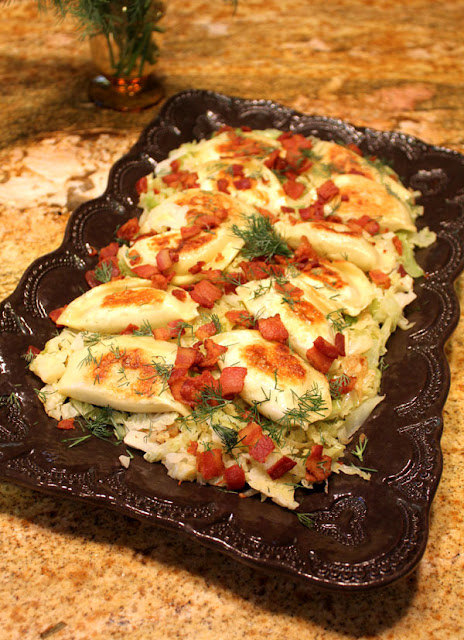 PIEROGIES WITH CABBAGE, BACON, AND ONIONS (adapted from Gourmet Magazine)

If Pierogies are frozen,  parboil them in a pot of boiling salted water uncovered, stirring occasionally, 1 minute less than package instructions indicated.  Transfer with a slotted spoon to a colander to drain.  Pat dry.  If they a fresh proceed with the following instructions.

Heat 1 tablespoon oil in a 12-inch heavy skillet over moderately high heat until hot but not smoking, then saute  the pierogies, turning over once, until golden, about 4 minutes.  Transfer to a platter and keep warm loosely covered with foil.

Cook bacon in same skillet over moderately high heat, stirring occasionally, until crisp and golden, then transfer to paper towels to drain.  Pour off all but 1 tablespoon fat from skillet, then add the sliced onion and saute over moderately high heat, stirring until golden, about 8 minutes.  Reduce heat to moderate  , then stir in garlic, cabbage, water and salt and pepper and cook, covered, stirring occasionally, until cabbage is tender, 5 to 7 minutes.  Transfer to platter with pierogies and sprinkle with bacon and dill.